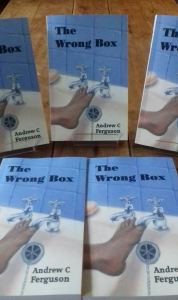 My novel, the Wrong Box, was published by Thunderpoint Publishing  on 20th April 2017. You can order the Kindle and paperback Edition from Amazon or Waterstone’s now! Here’s the spiel:

All I know is, I’m in exile in Scotland, and there’s a dead Scouser businessman in my bath. With his toe up the tap.

Meet Simon English, commercial property lawyer, heavy drinker and Scotophobe, banished from London after being caught misbehaving with one of the young associates on the corporate desk. As if that wasn’t bad enough, English finds himself acting for a spiralling money laundering racket that could put not just his career, but his life, on the line.

Enter Karen Clamp, an 18 stone, well-read wannabe couturier from the Auchendrossan sink estate, with an encyclopedic knowledge of Council misdeeds and 19th century Scottish fiction. With no one to trust but each other, this mismatched pair must work together to investigate a series of apparently unrelated frauds and discover how everything connects to the mysterious Wrong Box.

Manically funny, The Wrong Box is a chaotic story of lust, money, power and greed, and the importance of being able to sew a really good hem.

My maternal grandfather, Charles Leslie Anderson, was a modest man, so he would have been astounded to think anyone would write a book about him. However, he had a remarkable life: born just over 125 years ago into rural poverty, and abandoned by his mother at an early age, he grew up in the Aberdeenshire village of Huntly until called to the trenches of the First World War. Cut down by a bullet in each leg in 1916, he survived and returned to the trenches to see the war to its bitter end. Afterwards he lived to a ripe old age, a respected citizen and treasured father and grandfather.

My father, Charlie’s son-in-law, was a remarkable man in his own way. Amongst many achievements he set out late in life to chronicle the story of one ordinary soldier’s extraordinary story of survival, and publish it time for the centenary of the so-called Great War’s outbreak. Unfortunately he didn’t live to see its publication, but the family have carried out his wishes by publishing it in a limited edition run.

The Secret of Scottish Football

The Secret of Scottish Football was produced by Bloc Press in 2009. Three football stories set in Fife with a supernatural theme, Pat Nevin was good enough to provide an introduction.

It’s a limited edition of 250, signed, copies. There are still some copies left but not that many.

Lee McGowan   (see fellow travellers) was good enough to not only give me a kindly review of the chapbook, but to publish an interview with me about it on his football fiction site.

The non-fiction book about the Templars, the Masons, and Bruce at the Battle of Bannockburn I co-wrote with Bruce Hunter was published by Macoy Publishing in 2003. It seems to go for ludicrous prices on Amazon second hand, but I’m not sure if it’s still available direct from Macoy.