Keeping Fit by Breathing: A Time Capsule in Blackford

As some of you know, we’re currently doing up a flat in Edinburgh’s South Side, with a view to (eventually) Daughter and Heiress using it as her student accommodation. It’s an ex-Council flat, built around 1960, in a block of 6. We think the old lady who lived in it it last moved into it with her husband when it was new, as its first tenant. It’ll be, as they say, nice when it’s finished: great location, with views of Arthur’s Seat out one window, and Blackford Hill out the other. Solid, roomy construction, but everything needing done.

As we’ve gone through the arduous process of stripping away wallpaper and floorcoverings, the flat has gradually given up its secrets. It’s what you might call domestic archaeology: decorators seem to like leaving little messages, such as the the blokes who, 15 years apart, decorated the living room and left, under the wallpaper, their names, and the fact they were cousins. Or this little chap, left hidden by another decorator under the paper in the main bedroom: 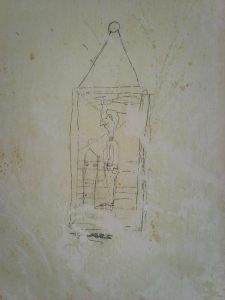 Another thing which our tradesmen seem to have turned up is this rather impressive looking metal knob – I thought at first it had come from the 1990s central heating, but a Google search reveals the company to have gone into voluntary liquidation in 1970, so it’s a bit of a mystery what it was:

Best of all, though, is the copy of a page of the Scottish Daily Express dated Saturday, September 19th, 1959, which turned up when the guys were lifting old floor coverings in the kitchen. Talk about a time capsule! A columnist called Albert Mackie has a rant about the removal of a clock at Edinburgh’s West End, and various other malfeasances, which mainly can be laid at the door of the Edinburgh Corporation (one Councillor, George Hedderwick, is slated whilst Mackie admits ‘even on the subject of smoking, while I don’t agree with him, I admire his single-minded sincerity in wanting smoking stopped’).

The entire bottom half of the same page, though, has even bigger news: Campbell’s Soup is back in the shops, for the first time since the war. A reminder, perhaps, that rationing had only ended 5 years earlier, in 1954. The flat itself is a reminder of those times too: the larder has a solid concrete shelf to keep meat cool in those pre-fridge days. We’ve decided to retain it as an original feature, much to the disgust of the plumber who had to core through it to get the piping for the new central heating system in.

There are some great mad wee small ads as well. Individually tailored slacks and jodhpurs, anyone? 100% Nylon outsize dress, in a ‘non-transparent floral design’? Just in case, you could wear the ‘briefest bra in the world,’ as worn by ‘models and showgirls.’ More practical, perhaps, a ‘sit-at ironing table, to save back and leg strain.’ Or ‘support & conceal those varicose veins with Helsur nylon elastic hose!’

The list goes on. ‘All-purpose’ chairs. Army blankets. Naval open razors. 8 watt amplifier, to ‘transform’ your guitar, or ‘similar instrument.’ 24 inch deep frame log saws. Learn Radio and TV servicing ‘for your own business/hobby.’ Cut your own hair with the patent ‘Easytrim.’ Hernia sufferers were spoilt for choice: the ultra-lightweight Rupta-Brace offered ‘undreamed-of relief,’ while the Autocrat Airmatic Appliance enabled you to tackle the heaviest and most strenuous work with COMPLETE CONFIDENCE. Not just complete confidence, mind – COMPLETE CONFIDENCE.

My favourite, though, has to be this ad for keeping fit by breathing:

I think it’s my duty to rebury the paper under the new plywood floor I’m putting down in the kitchen ahead of tiling it. Mind you, the way these renovations are going, I might take a note of the address for the Rupta-Brace…