Shelf by Shelf: A Bookcase View 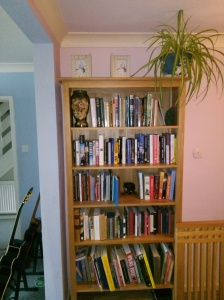 We recently laid new carpets and vinyl through most of the ground floor of our house. Not the most exciting opening to a blog entry, I grant you, but work with me on this! One of the great things about the kind of upheaval this entails is the opportunity to de-clutter: and, in the case of my bookcase, to reorganise.

I once knew a woman who had her book collection sorted in what, to me, seemed the most counter-intuitive way: by the colour of the spines. She shared a great big old high-ceilinged flat near London Road with her partner of the time, and there was a huge bookcase along one wall of the living room, with the books as a sort of art exhibit, mutating through blue, red, purple and the rest. Whatever colour the book’s spine was, that was where you’d find it. She was, needless to say, as well as being a very talented writer, also a visual artist.

Well, I’m not that clever, or counter-intuitive. I still think in terms of bookshop classifications, normally, when putting things together (apologies, librarians). However, I also went through some sort of long dark tea time of the soul a few years ago about what a bookcase was for. Is it to show what a clever clogs you are and display all the literary classics you’ve ploughed through, sometimes with gritted teeth? Or is it to hold on to books you’ll never read again because you have a connection to them? I sometimes think that, ideally, it should be a bookcase full of books you’ve not read yet, but I don’t suppose that’s going to happen. And yet…

And yet considerations of space also come into consideration. With a burgeoning guitar habit to support, the living room and diner doesn’t have limitless wall area. So, a few years ago, Thomas Hardy was brutally murdered and his remains disposed of to a charity book shop. Ditto one hell of a lot of poetry anthologies I was never really going to look at again.

This time round, I realised there still were quite a few classics I’d been holding onto in case Daughter and Heiress needed them for some sort of class essay or whatever. Given she’s now beyond the school stage and studying the fact-based world of journalism, that doesn’t still need to happen. Said classics are now in a box next to me here in the study, awaiting transportation to Oxfam in Edinburgh (yes, the drugs n’ hookers revelations haven’t put me off my default charity. And I’m sure none of it went on in their Morningside branch anyway).

So what survived? Well, shelf by shelf: 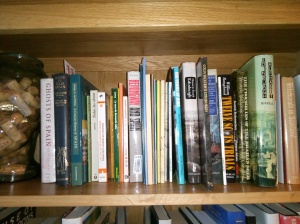 I guess this is what you might call the ‘place-based’ section: on the left, a group of books about Spain which might yet form the backbone of that travel book I’ve been threatening for a while. On the right, books about Fife, Edinburgh (including Charles Smith’s fantastic book about the south of the city) and some related ‘Scottish interest’ books on things like Burke and Hare, witchcraft, and so on.

That’s the top shelf, apart from the glass head with the corks in it. Oh, and a wee replica of Rodin’s Thinker, just out of shot. Together they must mean something, I suppose. 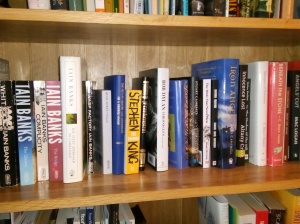 Second top, my Iain Banks (and Iain M Banks) collection, which I can’t bear to part with, having fleetingly known the great man. Then, in the middle, a very limited collection of classics I can’t – or won’t – give up: Dracula, Frankenstein, Hogg’s Confessions of a Justified Sinner, The Shining. Oh, and Bob Dylan’s Chronicles, which isn’t really fiction, or at least so he says.

To the right of that, a group of books by people I’m proud to call my friends – fellow travellers from Writers’ Bloc, and others. Pride of place has to go to the anthology with my mate Gavin Inglis in it, entitled ‘Grunt and Groan: the New Fiction Anthology of Work and Sex.’ 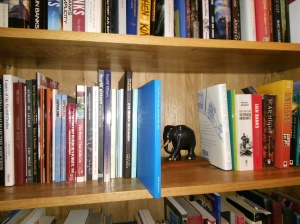 Next up, the Fergusons. Lots of anthologies of short stories with one of mine in – some of them even paid! – a couple with my brother’s; and my late Dad’s books on Glenrothes, his contribution to the Stair Memorial Encyclopedia of Scots Law, and his book on my grandfather, ‘A Huntly Loon,’ still available from the family for a very reasonable price.

To the right of the elephant book end are books I’ve bought but not read right through yet. My intention is to work on these steadily, and meantime not buy any others, given that the shelf is full: an intention only stymied by the pile of similar size by my bedside I’m working through, too. You may recognise the problem. 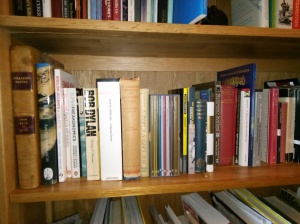 The shelf below that is a bit more eclectic. Some random non-fiction stuff, including a book on UK accents, and an excellent wee treasure my Dad’s cousin gave me years ago, ‘How to Lie with Statistics,’ by Darrell Huff.

Poetry, including Dylan’s lyric book (now there’s a debate…) and then, extending to the far end, my ever-increasing stock of Robert Louis Stevenson. I  have at least three different versions of ‘Kidnapped,’ but I can’t bear to get rid of any of them. RLS has, like Iain Banks, been such a powerful influence on my writing, that he’s going to stick around, no matter how Stalinist my subsequent bookshelf cleansings become. 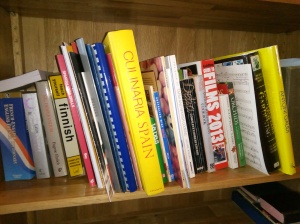 Next to last is the Outsize Shelf – books that are, frankly, too big to go on any of the other ones. Roughly divided into language dictionaries (plus a CD on Finnish I really must get back to Hannu Rajaniemi some time); song lyrics; cookery books that need sorted through to see if we’ll really ever cook with them again (but I bet Delia Smith will survive the next purge) and gardening books.

Below that, apart from a couple of Bibles retained for sentimental family reasons, an empty shelf, which is really too small to fit much into upright.

Does it show me as a well-read, cultured creature? Probably not so much. Has sentiment played as much a part as anything else in what stays? You betcha. These are, in the end, the guys that I want to keep close: because, for me, books have more meaning than all the words in them put together.

Does that even make sense?

Below here be weasel words that sell you things. Read a book instead. Or, indeed, a bookshelf.