‘APRIL is the cruellest month,’ TS Eliot said, ‘breeding lilacs out of the dead land, mixing memory and desire, stirring dull roots with spring rain…’ this being his epic poem, The Waste Land, he chunters on for a fair amount longer, but we get the gist and, frankly, that’s about as much as anyone remembers (I’d forgotten the bit about the dull roots and all that, to be honest).

Anyway, I’d like to say I was meditating on modern classic poetry yesterday as we wandered round the Edinburgh Botanic Gardens yesterday, but I’d be stretching it: the day before we’d shuddered in and out of charity shops in Morningside, as sleet tried very hard to turn itself into snow: today, the snow is making a proper go of it in our corner of the Scottish Lowlands. What is this crazy weather? 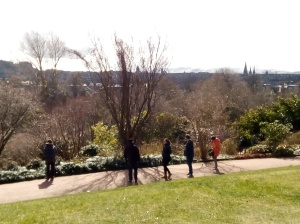 Yesterday, by comparison, it was just dry and cold, wind whipping across the sandstone faces of the nearby tenements as we exited the agreeable coffee shop quarter of Stockbridge (like Morningside, a village within the city that, as economic downturns come and go, still maintains the fur coat part of Edinburgh’s ‘fur coat and nae knickers’ image).

To the Botanics, then, with its outstanding internal and external views.

One of the real pleasures of the Gardens at this time of year is the rhododendron collection beginning to brust into flower. The severe winter seemed to have taken its toll on some of the plants, with evidence of frost damage. Nevertheless, there was the start of some sort of colour to be had: 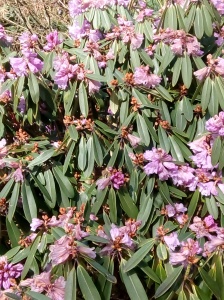 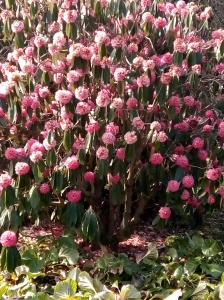 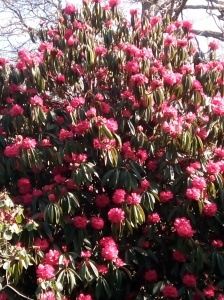 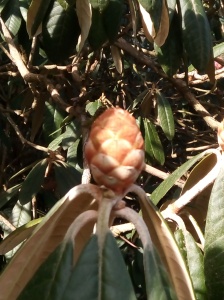 It used to be, of course, that you could go into the tropical and other glasshouses for a heat: but now they charge for that, so we stayed out! Fortunately, the little alpine glasshouses are free. 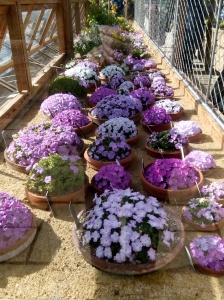 This alpine collection, sheltered from the recent storms, was really the highlight of the whole Gardens yesterday, and Edinburgh’s Botanics-visiting classes buzzed round them like puffa-jacketed bees.

We totally need to go back later in the Spring. The rhoddies will be really quite spectacular in a month or so. Still not sure what they’re doing to the great long herbaceous borders at the moment: they seem to be a work in progress; but the massive series of rockeries that climb towards the southern boundary are always worth a wander round. Oh, and the trees. Lots of trees of every description.

For now, though, the alpines were the ones putting on a show. 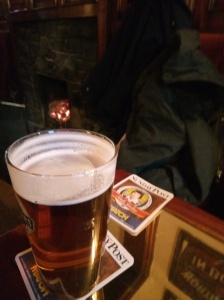 (Later, our excellent local, John Leslie on the South Side, provided a warming atmosphere. TS Eliot may have been right about April, but they serve Deuchar’s right through the month!)

…and the bit about Leslie’s is as close as you’ll get to an endorsement from me! Other people’s endorsements below here.