The Spice of Fife

It took me a long time to realise that Ruby Murray, as well as being the rhyming slang for eastern-influenced cookery, was a real person. Here she is – she was one of the most popular British singers in the 1950s, around the same time that Indian restaurants were becoming popular in the UK.

Just so you know next time it comes up in the Zoom pub quiz, she scored ten Top 10 hits between 1954 and 1959, had her own TV show, and appeared in a film with Frankie Howerd. Not bad for a girl from south Belfast.

At this point I was going to riff on how this clean-cut 50s idol died drug-addicted in a mirror-shrouded mansion in the Hollywood hills, strangled by her pet baboon who had tired of his cloistered existence and yearned for a career of his own. Sadly, the truth is both more prosaic and tragic: although she carried on performing for many years, Ruby became an alcoholic and died in a nursing home of liver cancer, at the young age of 61. She was visited regularly by Max Bygraves, apparently, but Wikipedia doesn’t say if that was a contributory factor to any of it.

Which is a very roundabout way of saying I do love a curry. Over the years, I’ve developed my eastern-influenced 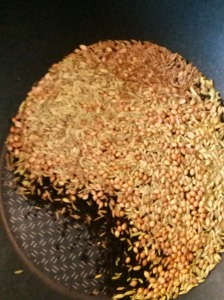 culinary skills past my initial experimentation on my student flatmate Kenny (even he drew the line at the curried egg) to the stage where I feel I can share my own spice mix with you. There’s no chilli in it, so if you like heat, you’ll want to add that straight off the bat. However, roasting the whole spices and grinding them yourself is dead easy and gives you a lot more flavour, I find.

4 teaspoons each cumin, coriander, fennel and black onion seeds. Heat a wok on a low-medium heat (I use the

lowest setting of the biggest ring on our gas hob) and lob the seeds in, dry, swirling them around a bit from time to time to ensure even cooking. After ten minutes or so, they should smell fantastic!

Empty them into the biggest, heaviest mortar you’ve got, and pestle them real good till you’ve ground them down to something like a powder. It’ll never be quite as powdery as commercial mixes, of course, but the key thing is to break the seeds down so they release the flavour. Alternatively, you could use the coffee grinder attachment on your mixer, but it’s not quite as satisfying.

Stick them in an empty spice jar and use a couple of teaspoons as a base for Asian or Middle Eastern dishes.