Cadiz and some purple prose 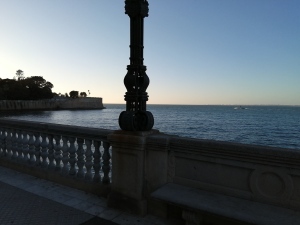 OK so the essentials first. Cadiz is a great place to visit: easily accessible by train from Seville (Santa Justa and San Bernardo Renfe stations). You can go for a day trip, but there’s definitely enough going on for three or four days. If you’re a beach fan, there are actually two decent ones to choose from: our preference was the bigger one, Playa Santa Maria del Mar. At least in early October, it was very quiet and peaceful.

We stayed at Apartamentos Luz de Cadiz and can thoroughly recommend them – they’re on Booking.com and no doubt other sites. Marta, who we dealt with, was super helpful and the accommodation was very comfortable. 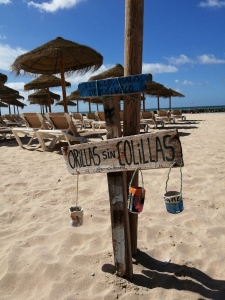 In terms of where to go and eat, if you follow the crowd out of the railway station you’ll basically end up in the main square, and leading from it there’s the wee street that goes to the cathedral, so you won’t starve. As ever, you’ll get slightly better value elsewhere – if you were to not follow the crowd and go left and up the hill, for example, where we had a menu del dia for 10 euros that was as good as anything else – but the places round the main square and the cathedral are good and set up for non-Spanish speakers.

One place I’d especially recommend is just a bit further to the right and in a side street off the road that leads to the cruise ships: Meson de las Americas, Calle Doctor Ramon y Cajal – an Argentinian place 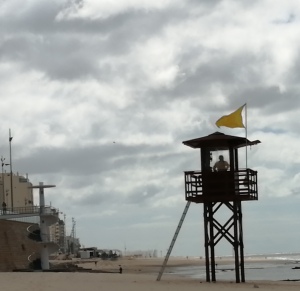 that specialises in, you’ve guessed it, meaaaattt! But of course sea food is also great here – Plaza San Francisco, further into the Old Town, has a few places.

So that’s the essentials: here’s some purple prose I came up with on holiday, with some more of the photos of Cadiz to illustrate:

The train accelarates to a mosquito whine, harmonised with the drone of wheels and rail; taking us from Seville, a town where the unattached could lose their heart to every second stranger; men with the face of Jesus, busy leaving the Cathedral quarter, or begging plainly in the street.

Picasso, blinded by the women’s beauty, painted faces from another world instead, that they 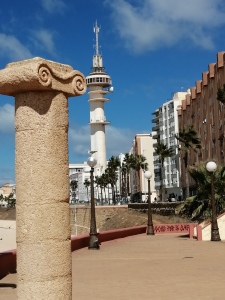 might be more believable. Now he’s in a garret in Purgatory, forced to recall every straying lock of hair.

The flat lands of Andalucia stretch away, broad brush strokes of yellow and brown. Presently we reach Cadiz, where the Atlantic butts foam-flecked heads with the sea defences; an isthmus then a rocky outcrop, permanently under siege.

The old shell of the settlement is sea-washed, salt-scoured; salt in its very bones. Perhaps that’s why it holds twelve churches in its short acres, one for each apostle. And yet the Cathedral, viewed from the sea wall in the falling light of evening, takes on the rounded geometrics of the mosque that went before, ghostly echo of the muezzin’s call in the patient clangour of the old church bell. 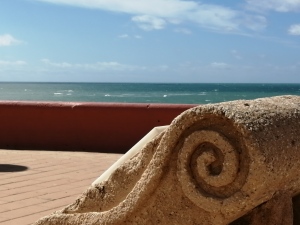 For everyone has been here: Pheonicians, Romans, Moors, the Christian Kings, trying to make the place their own. A Carthaginian column stretches to the heavens near the telecoms tower, whilst another capital crouches, its column gone, or perhaps buried by a sudden incursion of the sand.

Here, the people are open but wary, as if expecting another siege: even if that turns out to be the waves themselves.

In the markets, in the restaurants, the fresh-caught seafood washes into every corner: their flesh the only constant sacrament. 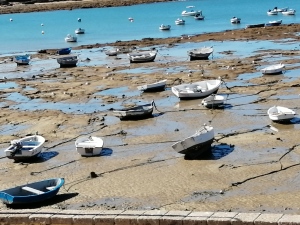