What I’ve Learned: about doing up a property

For non-frequent visitors to this blog, my spring and summer this year was taken up with a property renovation project. So, without claiming in any sense to be an expert, here’s what I think I’ve learned:

Sometimes, a seemingly simple job really can be rocket science.

Traditionally my DIY skills had been limited, I always felt, by a lack of ambition and the right tools to do the job. Armed only with a Phillips screwdriver, a claw hammer, and an almost fanatical determination to not be beaten by inanimate objects, results had been disappointing, to put it mildly.

Now that we were undertaking a Major Project, I was determined not to make a bodge job, and tooled up with the proper gear to get the job done. This did, actually, make a big difference, although The Redoubtable Mrs F and Daughter and Heiress came to dread the phrase, ‘How hard can it be?’

Be that as it may, the plywood work I put into the kitchen and bathroom before I put the tiling down is a masterpiece. Just a pity you can’t see it actually.

Fife tradesmen are the best.

Thank goodness it all got done before the Bridge got closed, eh! I can thoroughly recommend the following guys, who did their jobs with the minimum (for tradesmen) of fuss, and at a reasonable price:

Kevin Cushnie – a prince among electricians

All those things the property development programmes tell you are basically true.

Yes, it does always go over budget – just have a realistic budget to start with. I reckon we did stay within the budget our property developer pals told us it would take, which was half as much again as the number I’d had in my head. If you exclude the legal fees for the purchase. And the Stamp Duty Land Tax. But everyone does exclude those, right?

Under the same heading, yes, it’s impossible to project manage it yourself and hold down a full time job. Fortunately, unlike most of those poor bozos in those programmes, we weren’t living in a leaky caravan on the edge of the Yorkshire Moors in winter while it got done. A key thing in getting everyone working together was engaging guys who knew, and had worked with, each other, before. That cost a little more but was well worth it.

But despite it being impossible, project management isn’t rocket science. I mean, how hard can it be?

Getting it down to Ground Zero is much worse than getting it up again.

We had bought a flat which, whilst of solid ex-local authority stock, basically needed modernised in every way – new kitchen; new bathroom; new central heating boiler; rewiring; redecoration and new floor coverings throughout. The first four were basically what the tradesmen were there for: the rest was down to us. 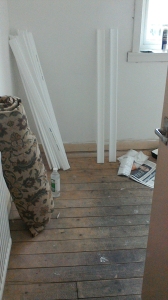 Firstly, there was the stripping of the walls: and what a hot, laborious, sticky job that was. After a little bit of replastering, there was the making good – a key example of where the proper stuff the plasterer left us being ten times better than the rubbish you get in B & Q – and then there was the removal of all the carpets, furniture left behind by the previous owner, random shit that turned up out of nowhere, yada yada. All of that turned what had been a perfectly habitable – if out of date – flat into a dusty shell that was unpleasant to live in – especially for the couple of weekends when there was no kitchen of any kind and we had to wash our dishes in the (newly installed) bathroom sink.

As soon as we started slapping paint on the walls, though, and the kitchen went in, motivation levels rose again. We might actually have spent about the same length of time on getting the flat back up from its Ground Zero, or possibly even a bit longer, but it sure felt more rewarding.

I never saw myself as a perfectionist, but actually I can be.

Not that interesting to anyone else, I appreciate. But I guess what I’m saying is, slaving your guts out on a project like this with your nearest and dearest for months on end teaches you a few things.

Once you’ve finished the project, it’s time to move on.

This particular project had two, slightly conflicting planned outcomes: rental property medium term, and possible student accommodation for Daughter and Heiress in a couple of years. We had to balance the need to keep everything bland, decoration-wise, against D & H’s tendency to scream every time we produced another pot of magnolia paint from the car. We’re pretty happy with the result: but it was strange how, once it was ready to hand over to the letting agents, it felt less like ‘our’ flat. I guess if we were proper property developers, we wouldn’t have got emotionally entangled with the fun of living there at weekends, and would have been already scoping out the next project.

As it was, our next project was really bringing our own house and garden back to some sort of order. The flat is now let to a family who, we hope, will feel it’s their home. Apart from student lets, I’ve always either lived in my parents’ house, or one I own. I’ve been very, very, lucky to have been able to do that, and I hope I’m not the last generation of non-rich people that can.

Living in Edinburgh is brilliant.

Yes, it has its frustrations, particularly if you’re trying to get anywhere in a car, and to park once you’ve got there. No one seems to like the Council. Much of the time, there’s a biting wind that gets you right in the kidneys. But the particular part of Edinburgh’s South Side where our flat is ticks just about all the boxes for me. It’s where I want to end up. Sooner rather than later. 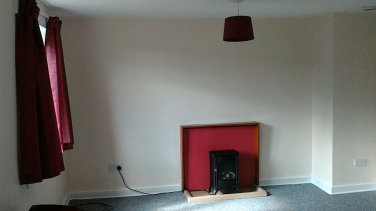