No disrespect or anything, but Beat Generator Live! (don’t forget the !) isn’t quite the image the name of the Cool Cat Club conjures up for me. There ain’t no jazz (thank goodness); the only smokiness came from a brief foray into dry ice production by second band Stoor; and if the barman had some bootleg moonshine tucked away somewhere the Feds wouldn’t find it, I wasn’t brave enough to ask for any.

However, as I wasn’t having to operate any automotive machinery for a good twelve hours, I was able to relax into Messrs Melville and Wood’s excellent musical entertainment with the assistance of some bottled beers, or they may even have been craft beers (what’s up with that now? Is that the same as real ale, or what? Is raffia work, some form of self-assembly jewellery, or throwing clay pots involved?)

Anyhoo, first up was Supermoon, in the person of Neil Pennycook, formerly the main guiding light behind Meursault. Musically a restless soul, Pennycook’s current incarnation on the night was a solo venture, with him alternating between Telecaster and keyboards, with added harmonica (ten extra points, obviously, for use of moothie in this reviewer’s marking scheme.) I loved the songs: melodic, clever lyrics, great performance too, even if not everything came off – a looper pedal (I’m guessing) was meant to do something in the case of a couple of songs, and steadfastly refused to do it; and a great performance idea of getting two people to phone each other on their mobiles, and then have your man sing into them when on speakerphone, didn’t come off. So everyone knows how to get their moby onto speakerphone, right?

No matter. This was great way to start the night, and if there had been a CD of the songs at the merch table, it definitely would’ve been snaffled. There is a limited amount out on cassette (of course) and digital – well worth a listen.

If Supermoon had suffered some technical problems, the gremlins were only getting warmed up for the next band, STOOR. Half way through a solid, well thought out set from this local four-piece, a string broke on the rhythm guitarist’s only guitar, forcing a frantic, and, ultimately, unsuccessful attempt to restring. Every fellow guitar player in the audience winced mentally for the guy as the bloody thing just wouldn’t tune up: fortunately, his bandmates followed the first rule of musical performance (known as the Titanic Principle, in deference to that band) – no matter what, just keep going.

Cruelly, a suitably spirited final number was further marred as the lead guitar, too, dropped out, but even then, the drummer and bass player/singer just kept going. They were very apologetic, but really, that never-say die approach gave their set a kind of heroic quality. It was a bit like that scene in Monty Python and the Holy Grail with the knight who refuses to give up, even when both legs and arms have been chopped off. 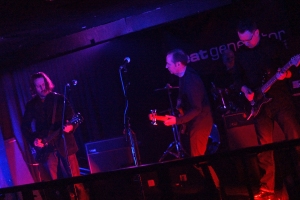 The gremlins had gone to bed, fortunately, by the time headline act De Rosa came on. Others more eloquent than me can tell you all about this band, and their new album Weem, so I’ll limit myself to saying they were a fine end to an enjoyable night. If I can cavil slightly (1) one minor criticism might be they could take a few lessons from Supermoon’s main man on engaging the audience.

But I only cavil slightly. You should totally check them out.

I hope to tip my trilby and lounge in a generally louche manner at the bar of the Cool Cat Club again sooner rather than later. Until then, next up is what I’m listening to right now.

(1) do you cavil slightly? Sounds a bit like a rather effete character in a PG Wodehouse novel: ‘the Honorable Henrietta Walthorpe’s previous beau, Cavil Slightly, had been the food reviewer for the Times before an ill-judged lobster thermidor at the Savoy had cut his promising journalistic career short and he retreated, eating only raw vegetables and whimpering inaudibly, to his ancestral home in Sussex…’ anyway, I digress.

For those of you visiting the site for the first time, Andrew C Ferguson is a writer and musician who’s giving out free stuff at the moment. Go to About to get involved.

Anything below this is advertising for other people. Part of WordPress’s  well thought out business model, no doubt.