For those of you who don’t know, One Billion Rising is an 8 day creative campaign, based mainly in South London, to raise awareness about sexual violence against women. It ends tonight, midnight on Valentine’s Day.

Key shocking statistic: world-wide, one in three women will be beaten or raped during their life time. Well, I was brought up  to believe that violence was wrong, and that it was particularly wrong for a man to raise his hand to a woman. Call me old-fashioned, but that’s the way I’m wired.

The marvellous Rose Fraser Ritchie has organised an online event for people who support this cause to post a poem before midnight in support. Unfortunately, I’ve kind of dried up on poetry these days, and a recent song lyric might have fitted in but needs some more work.  Instead, I’m going to publish a spoken word story I did a few years ago. I hope you enjoy it.

Everyone knows that we celebrate the martyrdom of Saint Valentine, on 14th February. You might even know that 13th to 15th February was originally the Roman feast of Lupercalia, where semi-naked men chased virgins around with strips of leather.

But few of you will know the full, shameful history of the man we commemorate with hearts and flowers.

For only now, ladies and gentlemen, I can reveal for the first time the ultimate fate of the real St Valentine’s relics. I will tell you the strange tale of how, having stolen a fertility rite from the Romans, Valentine was the victim in turn of the earliest – and most bizarre – example of identity theft.

Our story begins at the fag end of the Roman Empire, during the reign of Claudius the Second, also known as Claudius the Goth. Valentine – an early priest who secretly married couples illegally, and wrote love letters to his jailer’s daughter – was stoned, and not in a good way. We’ll gloss over him sending steamy texts to young, pouting jailer’s daughters, because what is most interesting about Valentine is what happened to his body after death.

Not unusually, a few close friends and relic hunters got in at the ground floor of a potential canonisation. They bought Valentine’s body back from the Romans and put it in a charnel house to rot down. It was what you might call a medium term investment: after ten years or so, the bones would be clean enough to divvy up and sell on, on the fast growing market in bits of martyred Christians.

In due course, Valentine’s sainthood went through, and the conspirators went to collect on their investment. It was then that our story took its first twist, for whilst the Romans may have been great at the acqueduct and other major infrastructural projects, their classification methodology for rotting corpses was, frankly, rubbish.

The conspirators had a bit of a poke around and came up with a body that seemed about the right vintage. After a lengthy series of mishaps, the bones they took away with them that day ended up in churches in Ireland, Italy and, most bizarrely, the Gorbals of Glasgow.

Modern DNA testing, and other research techniques, have led me to the conclusion that these bones did not in fact belong to Valentine at all, but to a Roman who died around the same time but who had followed a very different career path.

This man, Libidinus Maximus, was in his day the top leather worker for the Lupercalian rites. He had died – aged 95 – of a heart attack during a bout of vigorous lovemaking with a gorgeous, pouting jailer’s daughter who’d kind of gotten over that other Christian guy pretty quickly. ‘Max the Lusty,’ as he was known, had been married five times but was strictly pagan, and a big fan of Claudius the Goth.

This might have been the end of our tale had a bizarre document from the thirteenth century, entitled Il Incidiente Curioso di il perro en la nozze had not recently come to light. This tells us that the charnel house, with the hapless Valentine’s bones still in it, was finally cleared out one evening in 1247 by a local landowner, whose dog, a crossbreed named Lupo, made off with a thigh bone and was never seen again. The Curious Incident of the Dog in the Night Time concludes with an unconfirmed report that the dog, with the bone still in its mouth, was last seen being tempted aboard a ship by a group of Knights Templar who were just setting sail for Rosslyn Chapel.

Unlike late Roman charnel house records, those of the Royal College of Surgeons of Edinburgh are meticulous and exhaustive. After literally decades of research, I had finally persuaded the authorities there to carry out carbon dating tests on the solitary thigh bone labelled in 1831 by Doctor Robert Knox as ‘Solitary Thigh Bone, partially chewed, donation from Earl of Rosslyn,’ – the tests showing conclusively that the bone dated from the time of Valentine’s death – when disaster struck.

In the dead of night, a drunken medical student whom I can now name and shame as one Cameron McShoogle, stole the bone under the mistaken impression it was part of the skeleton of William Burke, the West Port murderer. When I tracked McShoogle down to his student flat, he told me that the bone had spent some time under his bed next to several Keep Left signs before mysteriously disappearing yet again.

It is, ladies and gentlemen, a tale of two cities. Glasgow thinks it has the original St Valentine but instead has Claudius the Goth fan, Max the Lusty. Edinburgh, on the other hand, may have had the original saint’s bone, but being Edinburgh, put it to commercial use.

For under close questioning, MacShoogle confessed to me that he was lying and that, in fact, he had ground the bone down in his coffee blender to sell to a herbalist as powdered rhino horn.

‘I wish I hadnae done it,’ MacShoogle said to me, tearfully. ‘If I’d known what it was worth, I could’ve paid off ma student loan.’

And that, ladies and gentlemen, is the ultimate fate of St Valentine’s last earthly remains. A shop I cannot name for legal reasons currently purveys the powder on an under the counter basis as an aphrodisiac. Although I can’t name the shop for legal reasons, I’m sure you know the one I mean: it’s the one with a steady stream of men and women of a certain age emerging from it and looking shifty. It appears that the word is out that the powder works, and works big time.

That’s why I had to publish my findings. I couldn’t keep the lid on this any longer. My working title is:

THE STONE BONER OF ST VALENTINE. 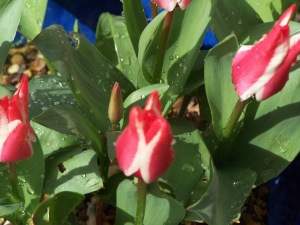 Anything below this is WordPress’s problem. Or revenue stream, if you prefer.