Songs in a Scottish Accent 4: the wrong kind of cricket

If you think of yourself as ‘alternative’ in any sort of way, there are sometimes moments when you realise just how far you’ve swum against the current and out of the mainstream. On such moment happened to me recently, when two art teachers, one of them wearing a maroon pork pie hat, called me ‘weird’ to my face. Here’s how it happened…

Some songs come to me with just the basic tune on acoustic guitar and keyboard. Others, usually late at night when I’m about to fall asleep and then forget them, are fully orchestrated – sometimes quite literally. Most are somewhere in the middle, and it’s a case of knowing what to put in and leave out instrumentally. Usually leave out, to be honest.

As soon as I had the basic riff and lyrical idea for ‘Prophets on Instagram,’ though, I knew the type of vibe I wanted on the track. And that included crickets. It was to be a bluesy, doomy kind of stomp, and the background noise of the Gryllidae family was part of that. Lanois used them on Dylan’s ‘Man in the Long Black Coat,’ on the album they did down in New Orleans (1), ‘Oh Mercy.’ Lucinda Williams, too, had them on some of the tracks on ‘Down Where the Spirit Meets the Bone.’ Probably partly through the movies, there’s a specific sound of crickets that conjures up a Southern Gothic night of humid, portent-filled dread for me. And I thought I had a means of getting it.

My go-to place for sound effects is Freesound, but I always prefer, if I can, to create noises of my own and load them up there for others to use. It’s a great sharing community, of the kind that the Net used to excel at. Whilst the Scottish Lowlands aren’t really natural habitat for crickets (or indeed cricket) I had, on recent visits to Pets At Home on our friendly neighbourhood retail park, heard them singing. We were there to restock the Redoubtable Mrs F’s aquarium (there’s a separate post to come some time on the tale of more-than-a-bit pregnant female guppy) but, on hearing the crickets, I conceived Plan A, which was to record them in situ.

Needless to say, next time I was there with my trusty Zoom H4n, not a chirrup was to be heard. While the RMF went to have her water tested (the aquarium’s that is, not hers) I went to look at the crickets. The crickets looked out at me, from their little plastic boxes containing little cardboard crenellations. I had come to understand on previous visits that nobody actually kept crickets as pets. Oh no: instead, people that keep reptiles as pets need them as a live feed for their little darlings. I was about to head up towards the fish again when I caught sight of the ‘reduced to clear’ section of cricket world, and wished I hadn’t.

It would appear that reptiles aren’t over fussy about just how live their food is: for a bargain price, the reptile lovers could take home a boxful of half dead, clinically dead, and dying crickets, grasshoppers, locusts and the like. Like all convenience foods, it seems, crickets and the rest have a shelf life. They waved their mandibles and antennae at me, pathetically, and I felt a twinge of sympathy for the wee critters. I mean, it’s not much of a choice, is it, getting snapped up by some bearded gecko or left to peg out under the unforgiving striplights of a retail shed?

Which partially explains why I ended up buying a full price box of brown crickets. ‘Oh,’ said the tall girl behind the till, ‘What is it you’ve got?’ Meaning of course, which reptile was awaiting a live dinner, its basilisk eyerevolving slowly in anticipation?

‘Err, nothing,’ I felt compelled to say, before launching into a probably over-detailed explanation of why I needed them. Just outside the store, we met two of the RMF’s work colleagues, the aforementioned art teachers. Again the explanation; this time, the reaction I described at the start. I considered a cheap rejoinder about the hat, but resisted.

Back home, the presence of a boxful of rustling insectoid life was considered less than welcome, really on any of our parts. The crickets went into the conservatory while I did a bit of reasearch. This revealed:

As an aside, it was amazing how much information on crickets in fact came from sites dedicated to reptile aficionados. Apparently, depending on how many scaly things you keep, you might need entire roomfuls of crickets just to maintain a food supply for them. Hence the desire for quiet ones. It seemed to me a bit ironic that the main sites I was consulting to keep my crickets alive, were in fact dedicated to seeing they were funnelled towards certain death. It gave me another twinge of fellow feeling for the little chaps.

However, after a day or so of watching mounds of home-grown parsley disappear in the box, and not a single sound beyond that infernal scrabbling, I decided enough was enough. It was time for my brown crickets to roam free across the Fife countryside, taking their chances in the local ecosystem – and, I hoped, not mucking it up in the process.

Walking nonchalantly out of the house and past the window of my ever-vigilant neighbours, I took the crickets to the closed off road at the side of our housing estate and had a quick glance left and right to ensure no dog walkers were about.

I looked down at the little fellers, crowded now at the front of their box. They stared back at me, mutely. I appreciated that I was probably sending them to certain death – Scotland in May is probably not within their recommended temperature range – and yet, somehow, I felt I was doing the best I could for them. In fact, I felt like some kind-hearted First World War general about to send his brave boys over the top, knowing that the German machine guns were, as likely as not, still operational.

As such, I felt some sort of pep talk was necessary. ‘Well, boys,’ I said, in a non-gender specific way, ‘I’ve done what I can for you. It’s down to you, now.’

Predictably, the crickets said nothing in reply as they scrambled into the undergrowth.

So there you are. Cricket, the sport: absolutely marvellous. Only game worth a tinker’s curse, imho. Crickets, the insect: best sampled via Freesound.

(1) I feel compelled to tell one of my favourite Dylan stories, which concerns that particular song.

Interviewer:’When you say in the lyric, “people don’t live or die, people just float,” what did you have in mind?’

Dylan: ‘I needed something to rhyme with “coat.”‘ 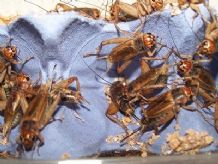 Anything below here is ads by WordPress. Which just isn’t cricket, don’t’cha know