Glenrothes: be part of her story

I’ve been thinking about my home town quite a bit recently, for various reasons, not least because next year is its 70th anniversary. Which is quite a landmark for what’s still called a ‘New Town.’

I was thinking about it this way the other day: if Glenrothes was a person, let’s just say for the sake of argument a woman, her life story would be something like this: born in 1948, at the start of the baby boom, the product of the same desire to create a brave new world that brought us a National Health Service and a town and country planning system to name only two other bold post-war bits of legislation.

Growing up in the grim 1950s, her heyday was the Sixties and Seventies, when she blossomed, developing fast in every way. She was ambitious; she had plenty of money; all the things that made her beautiful – all that landscaping and green space – were there for all to see.

Even then there were problems – heart problems, you could say: the town centre never really worked properly as a place for people to meet and circulate, at least not at night. There were tougher times ahead in the 1980s, and then in the mid-Nineties the analogy gets even more strained: the winding up of the Development Corporation that had shaped the town up to then was like – what? A divorce? A bereavement? Some sort of mid-life crisis?

The truth is, Glenrothes has never quite been the same since. Fife Council, my employer, may have done its best, but it was never going to be able to give the poor old girl the same care and attention – not to mention money – that her own Corporation had. Besides which, key decisions taken in 1995/6 – the selling off of many of the town’s assets to balance central governmental books, especially – continue to have an effect today.

Glenrothes still retains some of her beauty, even as she approaches 70. Much of the green infrastructure has matured, even if some of the bricks and mortar – not to mention the concrete and tar macadam – needs some work that goes beyond cosmetic surgery.

Anyway, enough of all that – if you’re still reading, it’s probably because you’ve some sort of interest in Glenrothes, and her back story. And here’s the thing: you have an opportunity to tell your own version of that tale. Dan Brown (no, not that one, the other one) is currently running a project whereby you can have your story, recollection, whatever you call it, about the town, recorded professionally and put up online, with video, a slideshow, or whatever you want really. There’s more info about it here.

Thing is, take up has been slow so far, and I think I know why – it’s the ‘storytelling’ bit. It makes it sound like you have to make up some wee story about a West Highland Terrier called Colin who one day buried his bone in the bus station landscaping and then couldn’t find it. It’s not! It’s about true life stories – YOUR true life story. There’s more about the digital storytelling concept here. It’s an American idea.

So please, please get involved! This is a great chance for Glenrothes – by which I mean its people, ordinary folk who’ve lived in the town, to tell its true story, good and bad, warts  and all. But it’ll only work if you get involved.

You can contact Dan at dan.brown@onfife.com. He’s a good guy, who’s been converted to the Glenrothes cause.

Tell him I sent you. 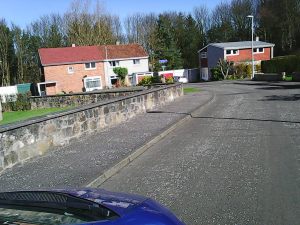