Off-Grid Adventures in Northumbria: The Best Holiday Cottage Ever? 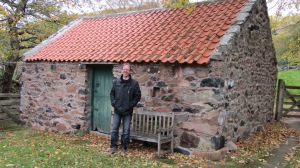 Me looking glaikit in front of the wood store. I wonder if they use the word glaikit in Northumberland.

When you go away for an October weekend in Scotland or the north of England with another couple, what do you look for? Comfortable accommodation? Decent walks/cycle paths for the more energetic? History on your doorstep? Wood burning fire? Easy access to a pub?

Coldburn Cottage, in College Valley, Kirknewton has all of these, apart perhaps for the last one. The nearest place of any consequence is Wooler, and that’s about ten miles away. However, there’s a great thing now called a supermarket, where you can buy your own food and drink, so if you’re prepared to do that, you’re sorted. They have them everywhere now too, not just Wooler.

The whole area is freighted in history. A couple of miles up the road, there’s the site of Flodden, a catastrophic defeat for the Scots in 1513 that left most of the Scottish nobility, including one of our greatest kings, James IV, dead on the battlefield. Also nearby is Homildon Hill, where in 1402 the Scots were soundly beaten again. If you think you see a pattern emerging, you’d be right: basically the one big battle we won was Bannockburn in 1314, and we’ve been banging on about it ever since.

Bannockburn’s much further north, of course. Here, at the modern Border, are what used to be called The Debatable Lands, where for centuries warring tribes identifying themselves as much by their clan names as much as whether they were Scots or English periodically knocked lumps out of each other.

The history goes much further back. Much of our journey south from Edinburgh was via the A68, which for some at least of its length is the route of the Roman road known as Dere Street, running north from Eboracum (York) deep into the Caledonian forests. The same road became the marching route for mediaeval armies: on the way back up we stopped at an excellent cafe just over the crest of Soutra Hill, where an ongoing  dig is uncovering some dark secrets from the former hospital that the Augustinians ran back then.

The cottage itself looks homely. If you’re looking for the latest crazy boutique/vintage/distressed decor, you won’t find it here – the owners have decorated and furnished it nicely, but conventionally, and none the worse for that. Highlights include the large dining kitchen, where you can cook, chat and drink all together at the same time; and the wood/coal burning fire in the living room. The bedrooms are up a slightly twisty, low-ceilinged stair so possibly not for everyone (and might prove a challenge if you’ve really been tanning the prosecco); there’s a bathroom (shower attachment on an old-fashioned bath; we stuck to baths, which were great) and a separate wee toilet.

The promo video gives you an idea of the place, although for some unconscionable reason it has a horror film soundtrack: for those of you who, like me, don’t entirely discount these things, the place had a really welcoming atmosphere – which is more than I could say for a couple of old cottages I’ve stayed in in my time. Although there is a proper axe in the woodshed should you wish to re-enact scenes from the Shining.

It’s the surrounds that really make this place though. I’d like to think that the residents of the area were left relatively untroubled by all the warring factions over the centuries, just because they were so fecking hard to get to: as you approach from the north, you see a giant’s huge, unmade bed of hills, which the main roads all skirt around. This is Northumberland National Park, and there’s a tricky enough drive along single track road for several miles, on past the car park where day visitors have to stop, and further into the valley, to reach the place. It’s just a few miles from the A1, but it could be half a country away. Here are some of the Redoubtable Mrs F’s photos (click on one to see the whole gallery):

What else can I say? Oh, just this. It has no mobile signal – you have to pretty much come right out of the Park and half way to the next town to get one. No wi-fi. No tv aerial or cable. There’s a tiny wee telly box that you could, in theory, watch DVDs on. We didn’t. We talked to each other, ate good food, drank good wine, walked, and talked some more.

I took my guitar and, while the others were still asleep, finished the lyrics to two songs I’d been blocked on for months. Then, unbidden, a really stupid third song in a country style about a guy that’s been trying to find a woman to dance to Dylan songs with him came to me, out of the sky. I don’t know if it’ll ever see the light of day, but it was fun to have its daft lyrics flowing out of me like a tap had been turned on.

There’s lots of research about the corrosive effects of blue light. I’m no scientist, but all I can say is a break from it was measurably good for my creativity. Actually, the valley has a few of these cottages available for short term lets, as well as a hall for performances, so it would be perfect for a songwriters’ retreat.

So, finally, here’s a stripped down version of one of the songs I finished (not the Dylan-dancing one: that can wait, possibly forever). I’d been experimenting with double-drop D tuning for a while (for non-guitar players, that’s when you tune the top and bottom strings down by a tone to produce a very mellow, low, droning effect) but I was struggling for words. I’d always been fascinated though by the story of the Roman Ninth Legion, the IX Hispana, who were stationed at York, and then disappeared from the records.

The legend – and some research – indicates they marched north to deal with those troublesome Caledonians, and didn’t come back. It may be why the Emperor Hadrian ordered the building of a wall right across the narrowest part between modern-day England and Scotland; again not far from where we were staying. Records don’t show whether he got the Scots to pay for it, but it seems unlikely.

There’s a place in the centre of York where, years ago, people saw ghostly Roman legionaries marching past, but cut off from the knees down, because of the change in ground levels. When we went there once, many years ago, we did the obligatory ghost tour, and, at the place where the legionaries supposedly appeared, I felt this almost overwhelming sense of sadness. Again, it’s up to you if you believe any of this stuff, but that’s supposedly one effect of the presence of spirits, I understand. That’s what the last verse is about.

Incidentally, when I say stripped down, it’s only because I’ve held back so far from going mad with the synths and sound effects. A ‘gone mad with synths and sound effects’ version may follow. I’m slightly worried I may have been channelling the spirit of Led Zeppelin, circa 1973, but then a chord change of D – C – G is hardly ever going to be the most original in the history of rock n’ roll, even in an alternate tuning!