I’ve been prattling on about music for 22 days now, and under that pretence trying to get you to donate to a good cause. It’s not really in my nature to preach about this stuff, and I guess if you haven’t donated by now you’re not going to, but here goes anyway (taken from a BBC article):

The plight of hundreds of thousands of Rohingya people is said to be the world’s fastest growing refugee crisis.

Risking death by sea or on foot, more than half a million have fled the destruction of their homes and persecution in the northern Rakhine province of Myanmar (Burma) for neighbouring Bangladesh since August 2017.

The United Nations described the military offensive in Rakhine, which provoked the exodus, as a “textbook example of ethnic cleansing”.

Who are the Rohingya?

The Rohingya, who numbered around one million in Myanmar at the start of the year, are one of the many ethnic minorities in the country. Rohingya Muslims represent the largest percentage of Muslims in Myanmar, with the majority living in Rakhine state.

They have their own language and culture and say they are descendants of Arab traders and other groups who have been in the region for generations.

But the government of Myanmar, a predominantly Buddhist country, denies the Rohingya citizenship and even excluded them from the 2014 census, refusing to recognise them as a people.

It sees them as illegal immigrants from Bangladesh.

Since the 1970s, Rohingya have migrated across the region in significant numbers. Estimates of their numbers are often much higher than official figures.

In the last few years, before the latest crisis, thousands of Rohingya were making perilous journeys out of Myanmar to escape communal violence or alleged abuses by the security forces.

Why are they fleeing?

Rohingyas arriving in an area known as Cox’s Bazaar – a district in Bangladesh – say they fled after troops, backed by local Buddhist mobs, responded by burning their villages and attacking and killing civilians.

At least 6,700 Rohingya, including at least 730 children under the age of five, were killed in the month after the violence broke out, according to Medecins Sans Frontieres (MSF).

The government, which puts the number of dead at 400, claims that “clearance operations” against the militants ended on 5 September, but BBC correspondents have seen evidence that they continued after that date.

At least 288 villages were partially or totally destroyed by fire in northern Rakhine state after August 2017, according to analysis of satellite imagery by Human Rights Watch.

The imagery shows many areas where Rohingya villages were reduced to smouldering rubble, while nearby ethnic Rakhine villages were left intact. 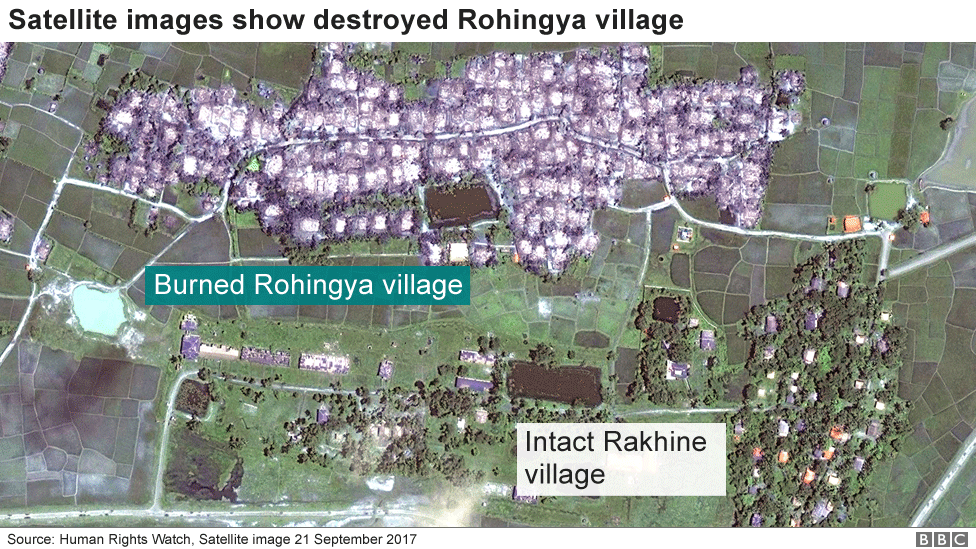 What is the scale of the crisis?

The UN says the Rohingya’s situation is the “world’s fastest growing refugee crisis”.

Before August, there were already around 307,500 Rohingya refugees living in camps, makeshift settlements and with host communities, according to the UNHCR. A further 655,000 are estimated to have arrived since August.

Most Rohingya refugees reaching Bangladesh – men, women and children with barely any belongings – have sought shelter in these areas, setting up camp wherever possible in the difficult terrain and with little access to aid, safe drinking water, food, shelter or healthcare.

The largest refugee camp is Kutupalong but limited space means spontaneous settlements have sprung up in the surrounding countryside and nearby Balukhali as refugees keep arriving.

While the Kutupalong refugee camp has grown from 13,901 to 22,241 since August, the number living in makeshift or spontaneous settlements outside the camp has climbed from 99,495 to more than 547,000.

Other sites in the region have also expanded – as of mid-October 2017, there were 10 sites occupied by more than 12,000 people.

There are also around 78,634 people staying outside the camps in host communities.

What is being done by the international community? 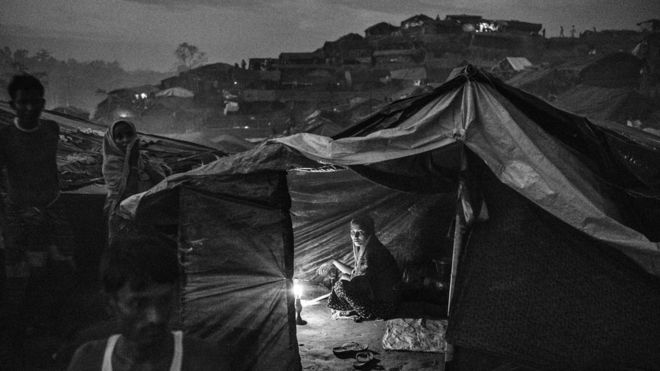 The need for aid is overwhelming.

There has been widespread condemnation of the Myanmar government’s actions but talk of sanctions has been more muted:

OK. I think that gives you the idea. I could rant on about organised religion, but really, it’s just another example of man’s inhumanity to man, woman and child. Christian, Muslim, Buddhist, Cohenite or Brutalist, you can get that, right?

I’ve been promoting the Red Cross Appeal, but if you google ‘Myanmar appeal’ you can get others too.

Here’s a song by the late, great, Tom Petty that kind of fits the theme.

…and as a wee bonus, here’s a Dylan track I’ve not heard for a while – good video too!

If you haven’t had enough adverts from watching the ones at the start of the Youtube videos, here are some more.