A Word On… Spanish Stuff

Here’s a couple of what I’d plan to be sidebars in my book on Spain. As ever, be delighted to have any feedback! 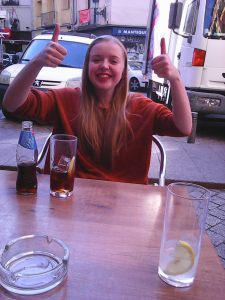 A Brief History of Spanish Time

If you ever need a reminder that the Mediterranean peoples, including the Spanish, are the cradle of Western civilisation as we know it, come with me of a summer’s evening to any one of Spain’s regional cities and sit at a table in a café watching the world go by.

It might be 9 or 10 at night; it might be a Monday. If it is, the only difference might be the cafes are slightly less jam packed. Everyone’s eating and drinking like it’s going out of fashion. There’s still a significant amount of them smoking. They all look fantastic on it.

A satisfied customer at a Madrid cafe

What’s more, nobody’s drunk. Nobody. You might see drunks in Madrid or Barcelona, but they’re probably foreigners. Instead, in this regional city – let’s say Léon, for the sake of giving a recent example – there are all ages out and about, from immaculately-dressed elderly couples, to middle aged folks with their teenage kids, to younger mums with babies; the teenagers out on their own, by the way, are sitting at the next table, drinking coke politely, checking out the opposite sex discreetly as they walk past, and not being any bother to anyone. If they are being a bother, they’re probably French.

And, although it’s ten at night, nobody looks like they’re in a hurry to go home. Indeed, some of them are still going in to eat their main meal of the day, inside the restaurant, in the air-conditioned salon comedor. For the rest of us, the atmosphere is relaxed, congenial, and unhurried. It is as if everyone has all the time in the world.

Now, if this seems to give an idealised portrait of the Spanish way of life, let me just say, ok. The health stats aside, the Spanish are as worried about their health and happiness as the rest of us: the telly adverts are as full of stuff about slimming, gym memberships and how to stop smoking as anywhere else; I saw an advert in Spain recently that claimed that the Spanish have the greatest amount of cosmetic surgery in Europe. But let me take you on that evening out (you’re buying, obviously) and you’d be forced to agree.

So what are they doing right? Can it really all be down to having a wee sleep in the middle of the day?

Well, the concept of siesta isn’t without its Spanish critics. My friend Rufino, for example, has a much more northern European approach to work, and wishes he could do without the midday break and be home at a reasonable time. As an abogado – a lawyer – he’s expected to be available for clients till around 8 at night, in the same way shops and other businesses stay open till that time. The Catalans, too, tend to dismiss siestas as a soft southern invention they don’t need to adhere to.

But, for the majority of Spanish people, time is still a much more fluid idea than for us northerners. They might rise early, particularly if they commute. However, going to breakfast in a café between 9 and 10, you’re quite likely still to see office workers and construction guys dawdling over a café con leche even then.

That may explain why, when British and American tummies are starting to rumble at one o’clock, the Spanish restaurants aren’t really filling up and you’ll have your choice of table. Almuerzo, the big middle of the day meal, often happens well past midday – at 2 or 3; it can be a family meal, or one with colleagues; but either way, many shops and businesses then close up for a couple of hours at least. Whether people have time to go home and get some kip may, again, depend on the size of the city, and its property prices. However, in general, most people seem to.

Things only really start to get going again around 6 or 7. By then, shops will open up again, the inevitable drilling of roads and buildings will recommence: and people will drift towards cafes and bars for a drink, unless they’re working. And stay there, meeting friends and family (most socialising happens outside the home in Spanish culture) until whenever it suits. And that could be the wee hours.

The good news is that the restaurant/café culture is a lot less rigid than it used to be. In most places, they’ll serve you a range of things from tapas, ranging up through racion-sized portions to the full bib-and-tucker three courses more or less at any time. 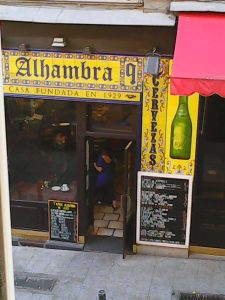 Tapas, Raciones, and all that sort of stuff

So most of you will know the story by now about tapas, right? That it originated in the deep south of Spain, where the waiter brought you your drink with a tapa (cover) on top, consisting of a bit of bread or something similar, to keep the flies off your drink.

Well, maybe. That story always seemed a bit hokey to me, particularly given the likelihood that, as soon as you took the bread off, the flies would dive right in if they were interested. Although, in my experience, insects are much more likely to settle on something solid like bread than they are to ever dive-bomb your glass of tinto de verano.

Madrileño tapas bar. Great street for tapas; for sleeping, not so much.

So, in the interests of research, I had a look at an article from the southern Spanish newspaper ABCdeSevilla, which offered a number of theories, alongside the insect repellent one:

Well, it doesn’t really matter. However, it is interesting that two at least of the theories centre around the idea that, by eating at the same time as drinking, you become less likely to end up falling down drunk after a few glasses of wine.

So what’s a tapa, and what’s a racion? In general, the second of these is a bigger portion, and you have to ask for it: tapas will, sometimes, come with your drink whether you ask for it or not, and if you haven’t asked for it, is included in the price of the drink.

Of course, generosity and complexity of free tapas in particular varies hugely. In Madrid or Barcelona, you’ll be lucky to get a bowl of crisps most times: in the smaller regional cities, however, you can sometimes just about eat for free.

The most generous tapas-you-didn’t-ask-for culture we’ve come across so far was in Léon, where a morning coffee produced a free slice of almond cake; and later drinks might be accompanied, unbidden, by a plateful of calamari, deep fried peppers, and other such delicacies, for no extra charge. And it’s not even as if the drinks cost as much as in Madrid!

Traditionally, many bars would specialise only in one or two tapas dishes, so that you would have a drink and their speciality, and then move on. Similarly, the glass size of the alcohol you were having was small, to reflect that you might be having a few drinks in different bar, and you weren’t actually setting out to get hammered.

Inevitably, commercialism has taken over a bit, so that each bar will serve you something for free, but also have a menu or carta de tapas so that you can stay in the same bar all night. If you’re not planning to get hammered and you’re drinking beer, ask for a caña, which is generally a small glassful of the house lager. 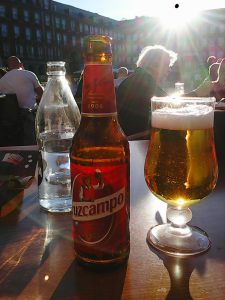 Plaza Mayor, Madrid. Traditionally the place for the first beer of the trip.

Hitting the return key pushes the adverts down here. Petty, isn’t it.