Three Weekends in May (2): The Fall of the House of Blackie

A long weekend in a Charles Rennie Mackintosh house. It sounds like an improbable tale, unless of course you’re impossibly rich and connected to what, I suspect, would be some highly secretive and aged inner circle of CRM devotees.

However, that is what we did in a gloriously sunny weekend in May, with no more financial outlay than we would have spent on short break in reasonably priced hotel, and with no more hidden knowledge than the National Trust holiday lets brochure.

And it was very possibly our last chance to see.

To explain, to some of you coming at this new: Hill House, the Mackintosh-designed Helensburgh home of the Blackie family, has a flat on an upper floor that you could rent out for vacations; despite having visited it twice over the years, I only found this out around the time that the window to do so was closing fast. CRM’s architectural and interior design masterpiece is suffering, due to the Portland cement cladding on its exterior acting as a sponge which is starting to destroy the inside, the warm damp atmosphere washing up the loch reaching its sticky fingers inside.

Hill House is an incomparable mix of incredible, timeless artistry and a domestic setting which, whilst much grander than your average three-bed semi, is still relatable in a way that the castles and palaces of earlier times just isn’t.

It was such an impressive thing I was moved, after the first visit, to poetry:

and we’re ghosts in a time slip;

the servants off somewhere, toys tidied in the nook

at the top of the stair: a stage set,

a dressing up box, a pirate ship

as if they would break the spell

of rising clouds of architecture in the hall,

the drawing room a solid cube of light

to indicate the master, or the son and heir,

the house wrapped round them on

closest to the setting sun.

However, this time round was different. First there was the fact that we were, actually, staying there: and whilst the main house was out of bounds to us, the flat we were in was, in reality, just a closed off part of that greater whole, comprising the former school room and the servants’ quarters. As such, it was furnished, simply, but plainly, in the Mackintosh style – I never got around to asking the guides if the stuff in ‘our’ bit was original – but, at night, when the iron gates closed to visitors and the staff left, the gardens and exterior were ours too.

the flat interiors: guitar model’s own. Below, some views from the flat of the main house

Second, there was that last chance to see element. The solution to the water ingress the NT have come up with is to build what amounts to a muckle greenhouse over the top of it. This will keep the rain off while they work out how to fix the problem: the displays in the house talked about how there would be a tension between those that wanted to stick to the original vision and not change a thing, and those who favoured a pragmatic solution. 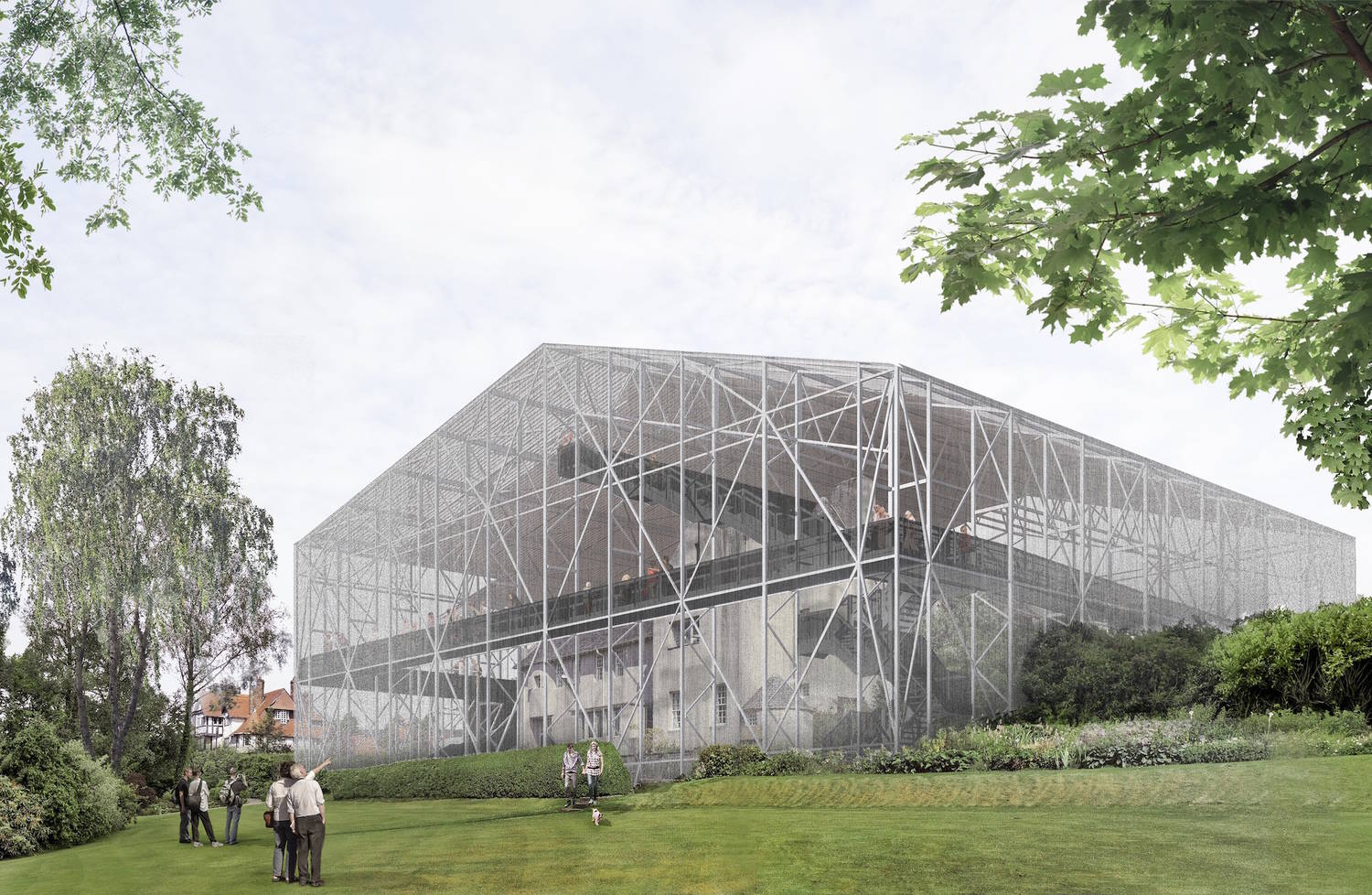 Personally I think it’s a no-brainer: unless you want the place to be permanently covered by a space-age conservatory, a pragmatic solution of replacing the failed cement with a similar but weatherproof material sounds like a plan to me. But then that’s maybe just me.

What the displays didn’t talk about, but became apparent from the chats I had with various staff, was just how extensive this ‘temporary’ structure to keep the rain off was going to be. It’s going to have lifts, and walkways, and everything, for goodness’ sake! There was even talk of the House itself being closed to the public for quite some time, with visitors being reduced to peering in the windows from the walkways. On that basis, if you want to see round it, crack on now. It’s later than you think.

I hope the pictures, taken on my mobile, give some impression of the look of the place. In a sense the interiors were less impressive this time round, not so much from familiarity, but because the signs of water damage were becoming ever more apparent: I didn’t remember the walls peeling quite so much last time. In another sense, of course, it was still all deeply fantastic.

Another slightly disappointing, if understandable, development was the dark blinds on the drawing room windows: whilst they probably should have been there long ago, it really spoiled that sense of what the summer function of the room was, which was to stare out over the rest of Helensburgh to the loch beyond. As you can see from the poem, it was one of my abiding images of the house.

But what was it like to stay in this Scottish architectural icon? Well, what struck me most – apart from the sheer pleasure of sitting in the gardens with a glass or two of wine in glorious sunshine like we owned the place – was how the Hill House had become the intertwined life stories of three distinct entities: the Mackintosh/MacDonald partnership, the house itself, and the Blackie family whose home it was for nearly 50 years.

Mackintosh’s life trajectory (and that of his wife, Margaret MacDonald, whose often uncredited artistic genius went into, amongst many other things labelled CRM, the Hill House interiors) is pretty well documented: early appearance as, along with Margaret, one half of a group of bright young things known as ‘The Four’ (or, to their critics, the ‘Spook School,’ for the ethereal style they adopted; the glory years as a Glasgow architect with Honeyman and Keppie – even though at the time his work was not universally liked: the Hill House is only one of a solid hillside of mansions, many of which favoured the Arts and Crafts style of, amongst others, William Leiper; the wilderness years in London and the South of England; and, finally, four all too short years in the South of France, rediscovering his passion for painting, a life cut all too short at sixty by mouth cancer.

One thing I didn’t know was that Mackintosh (1868 – 1928) was born within a year of Frank Lloyd Wright. The difference, of course, was that Wright was still accepting commissions in the 1950s, whereas Mackintosh was long lost to the world of architecture (and forgotten, until relatively recently, in his home town too).

So much for the architect. What of the house? Well, it was sold by the Blackies in 1952, on Walter Blackie’s death. Fortunately, the purchaser was President of the Royal Institute of Architects in Scotland, so it was treated sympathetically, even though some interiors were lost. It passed to the National Trust in 1982: all the while, from very early in its existence, nursing the water penetration issue like a wound that won’t heal.

In many ways, although disappointed to see how much damage was starting to become apparent inside, I still feel very positive about the House’s continued existence. It is just too well beloved to be allowed to fall. The mega-greenhouse is costing a big bunch of money to put up: with that level of public investment (in every sense of that term) committed, I can’t see the NT being allowed to let the place crumble even if it wanted to.

One thing that had intrigued me before was the part of the Trust’s brochure which talked about the schoolroom having some sort of ‘atmosphere.’ So was there? Not really. On the first night we were there, late on, there might have been a sense of a gathering presence in the main room (or that might have been the extra glass of wine talking to my limbic system). If there was, it didn’t manifest in any other way: maybe the Blackie household was just checking us out and, satisfied of our good faith, then withdrew.

And what of the Blackies? I called this piece ‘the Fall of the House of Blackie,’ and viewed one way, you could certainly see it as such. The publishing firm, after all, was in its imperial phase when Walter Blackie commissioned Mackintosh to design Hill House: and for the many decades of their occupation of it, a stranglehold on the Scottish educational textbook market ensured their continued existence.

There’s almost definitely a book to be written on how the firm, with its distinctive hardback covers (Talwyn Morris, its artistic director, introduced Mackintosh to Blackie, and was sympathetic to the Four’s style) eventually fell, being taken over by HarperCollins in 1972 and disappearing finally in 1991. Sic transit gloria mundi and all that.

I suspect such a book would have to focus on Walter Senior, who inherited the business – despite first refusing to join it and spending a year as a lumberjack. The knowledgeable guides gave intriguing snippets of the family history: how the children were quite spaced apart in terms of ages and how, in fact, Mrs Blackie moved in with a babe in arms; how Walter Junior, the son and heir, left home from Hill House to be married at the relatively advanced age of forty; how, on her husband’s death in 1952, Mrs Blackie left the house with the one daughter remaining living with her, the rest of the family having long moved out and showing no interest in taking the place over.

Apparently, some of the grandchildren used to visit the house now and again; but one lasting  – and quite touching – memory of the fallen house of Blackie was a plaque near the front door, which related that Nancy Blackie, not a blood relative, but the widow of Walter Junior, served as a volunteer until the last decade with the National Trust at the house.

Just going back to spiritual presences, I was told that, in the main house, you could occasionally be surprised by a passing whiff of Walter Senior’s pipe smoke. I hope that, in the future, he’s remembered for more than than that. Mackintosh may have been the architect, but Blackie was the inspiration, a man of business who might have required the dark Edwardian wood of the reception room for his clients, but still had the vision to understand why Mackintosh and MacDonald might want to surround the master’s bed with ghostly ladies.

Apparently, even late in Mackintosh’s life, Blackie was still in touch with him, buying his South of France paintings. Perhaps CRM’s most loyal client deserves a book of his own, amongst all the 150th anniversary hoopla. It was certainly a pleasure to stay over at his place for a weekend.

Adverts there be below here