Three Weekends in May (3): Bridge of Orchy

Executive Summary: I had a great time at a songwriting weekend in the Highlands, and you should totally buy this album as all proceeds go to Cancer Relief UK

What a summer so far! June might have been a bit mixed, but it’s heading into July on a high: and the heatwave before that, in May, was pretty special too. Which brings me to the last of my three remarkable weekends that month, when, between the 25th and the 28th, I joined a songwriting get-together in a ski lodge near Bridge of Orchy. 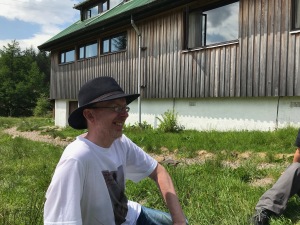 Hat to keep off the sun, surprisingly (pic: James Whyte)

A ski lodge? In May? Actually, in many ways, the venture was very like the story of the building of the lodge itself, which, apparently, had been a case of a bunch of people from Edinburgh who knew each other, and liked skiing in this bit of the Highlands, getting together and building the place by themselves. A massive, rambling place which featured basic-but-clean accommodation in wooden clad rooms, its main attractions for a bunch of like-minded songwriters getting together and building a songwriting weekend together were:

b) it was cut off from most modern amenities like internet contact (although the poor mobile signal was a bit of a chore for a couple of our number who were expectant grandparents); and

c) it was set amidst stunning scenery, which, unusually for the Highlands, was clearly visible in blazing sunshine that weekend and not covered in a combination of rain, mist and clouds of midges. 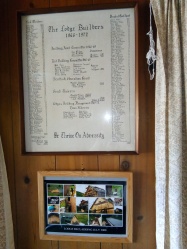 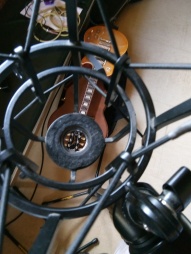 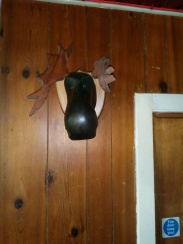 I was really boosted to be asked to come along. The whole weekend had happened already last year, so I felt a little like the new kid on the block: the rest of the group consisted of some people I knew, and most who I didn’t, or had only glimpsed across a crowded gig venue. However, it quickly became apparent that I was amongst genial, like-minded company. Although the place would have been a perfect setting for a murder mystery where songwriters disappeared, dispatched in a series of increasingly ingenious, music-related methods, no-one seemed homicidal. At least openly. I made my call home on the Friday night and relaxed, already feeling the benefit of not being able to check social media.

The secondary purpose of the weekend was to record some live work, with Gerry Callaghan, one of the organisers, at the digital desk. Gerry, an accomplished singer-songwriter himself, is also a very talented engineer and producer, as I knew already from his work on Norman Lamont’s new album. The set up was in the big room where we ate, sat and did most of our workshop activities, of which more in a minute. On the Friday night, it was Norman Lamont and Tricia Thom’s turn: as you can hear here (the link takes you to the album of the weekend, of which, again, more later). Tricia has a fantastic voice, and her delivery of ‘Crying in the Street’ is simply stunning. 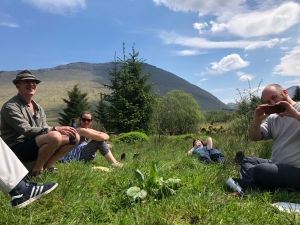 On the Saturday morning, Norman started us off with a mindfulness session: if any of you are groaning internally, this was definitely at the unfussy, non-pretentious end of that sort of thing. Sitting in the sun in the Highland landscape, eyes closed, listening to the sound of the water in the burn and Norman’s dulcet tones is, like many other things that weekend, an experience I wished I could put in a bottle.

Next up, the first workshop. Norman had us pairing up and walking round the ruined house a hundred yards or so up the track from the lodge. This was a strange blot on the landscape: a relatively modern place that had been smashed up, it appeared deliberately. According to Callum Carlyle, further up into the woods there was a clearing surrounded by the remnants of police incident tape, so maybe the place was the perfect setting for a slice of Highland noir after all… 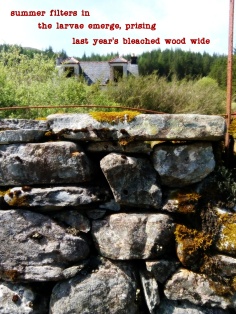 Back at the lodge, Norman had us reflecting on what we’d discussed between us at the ruined house, and writing haikus individually. I must admit there was a part of me that groaned internally – I thought I’d finished with writing poetry – but I knew Norman’s intention: there are few greater examples of compression acting as a spur to creativity than the strict rules around the haiku form. We duly produced a number of poems and then, suitably inspired, paired up again and set about writing songs, Norman giving us a simple chord progression to set us off.

One of my efforts at haiku, with the ruined house that inspired it 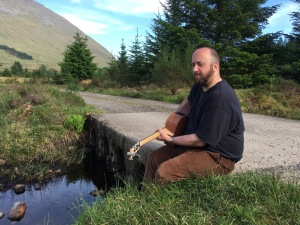 My songwriting partner, James Whyte, was one of the group who fell into the ‘seen across a crowded gig venue’ category in acquaintance terms: bass player in Norman’s band, he’s also a talented singer-songwriter who really should release more of his own material. However, his EP, Ship, is out there on Bandcamp.

Co-writing a song with someone you’d kind of just met properly was interesting, to say the least! However, it was a fascinating insight into another person’s creative process. In the Highland sunshine, with the sound of the burn babbling beneath our feet, it wasn’t such a bad way to spend an hour!

James in reflective mood at the burn. Pic: Gerry Callaghan

That night, after dinner, we abandoned our own songs for the evening and just jammed: all the singer-songwriter favourites you might expect came out (I remember Neil Young getting a good airing) and some you wouldn’t. It was a great way to kick back. 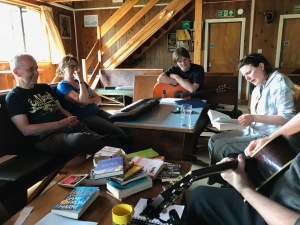 The songwriting workshop the next day took things to a new level. Norman had asked us all to bring along a couple of books, and we put these in the middle. Then, pairing up again, one of us came up with a chord progression while another sang from one of the books. Yes, that’s right: sang, from one of the books! You’d be surprised how good that sounded: it was a bit like improv, and some of the results were, actually, quite inspiring.

Next up, we were to come up with ten song titles for songs we hadn’t written yet. I struggled a bit with this – the title of anything I do is generally the last thing I come up with – but there was a buzz round the table as we discussed each other’s lists, and expressed views on which ones we wanted to write/have written.

I’ve said to a couple of people since that, as everyone dispersed from the main room to write the song title they’d chosen, it would have been fascinating to have had an MRI scanner to hand to see what bits of our brains were lighting up, because it would have given boffins a fair view of what inspiration looks like. Of course, it might have spoiled the moment slightly for us all to have had to get loaded into an MRI…

As I walked out of the lodge to my favourite songwriting spot next to the burn, my brain was buzzing particularly with two thoughts: the chord progression Gerry had chosen, E through F#m and G#m to A, was one I’d previously thought of as a good start to a song; and the way Callum had put a conversational part of a novel to it had worked particularly well.

Originally, my idea was for a song in the Paul Simon/Suzanne Vega type of mould, with a couple of street-smart New York types trading bitchy comments with each other. My song title was ‘Clara Said, Yesterday,’ so Clara, clearly, had to get things started. She told the narrator she’d made the coffee far too strong; but then, before my narrator had a chance to come back with some whip-smart reply, Clara was chuntering on again, something about a recipe. At that point, the narrative started to change: this wasn’t a meeting of equals in some trendy loft apartment after all. I think I wrote the third verse, with its emotional punch, next: once I had that in place, the rest followed.

We got 45 minutes to write something. In the end, I had something, and it was a complete song I’d had no idea I was going to write before the book-singing session. When we returned to the lodge, it was clear I wasn’t the only one who’d been inspired: not all of the great songs written in that brief period have made it out there yet (Ed Ritchie’s ‘Bookends,’ for example) but there are a couple of them on the album: Calum’s ‘Uphill’; and Norman’s stunning ‘10 Objects’. 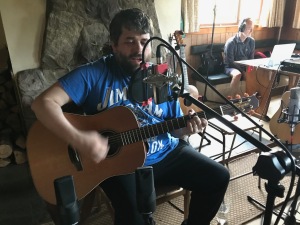 Did I say album? Yes, dear reader, because, even if you weren’t with us on the weekend, some of the magic was bottled, with the best of sessions from the aforesaid Norman and Tricia, Calum, Impossible Songs (the husband and wife team of John and Ali Graham Barclay), Ed and myself all being engineered, produced, mixed and mastered by the irrepressible Mr Callaghan into a digital album that you can download on Bandcamp right now. What’s more, the proceeds will go to Cancer Relief UK, so please give it a listen and download what you enjoy: there’s some great stuff on there.

Ed Ritchie, aka Dog On A Swing, being mixed and mastered by Gerry Callaghan (pic: James Whyte)

As you’ll have gathered by now, I had a blast, and hope to go next year. Final thanks are due to Fiona Thom (aka Ms Fi of Ms Fi and the Lost Headband) who, having recorded a session last year, sat out the recording this time, and contributed a very useful workshop on performance; and Sarah, Gerry’s wife, who masterminded a meal plan for us that maximised good food whilst minimising cost and the need for fussy cooking.

The songwriters’ dance. So relieved the cleaning up of the lodge at the end is done (pic: James Whyte)

Adverts down here for stuff that won’t be half as good as that album!