What the Romans did for Segovia: and how to get the best table in Spain

Ok. For those of you benighted enough not to get the cultural reference, I’m talking Python here, and not the computer language neither. In Life of Brian, the leader of a revolutionary group determined to overthrow the Roman occupation of the Holy Land asks them, ‘What have the Romans ever done for us?’

There’s an awkward silence, before one of the group offers, ‘the acqueduct?’ There’s then a list from the others of a whole lot of other improvements, such as improved sanitation, roads, lower crime rates…

Well, I don’t know about the other stuff, but the Romans certainly did a good acqueduct for the natives of Segovia. It’s humungous! And, being one of the biggest tourist draws (interesting cultural note: this is the first time I’ve seen signs in Spanish, English and Chinese – sign of the times, or indeed the new world order) it’s encircled by restaurants and cafes.

Which brings me to a bit of advice on Spanish restaurants and bars in general, and how to get the good stuff, eats and drinks wise.

Ok, so basic build philosophy for your average Spanish city – perhaps not so much Madrid and Barcelona, although the overall principles are the same. They were, originally, built in defensive positions, close to a river. They will generally be on a hill (castles built in a valley tended not to last very long, as the invaders were able to stand on the hills and lob stuff in). This initial settlement will be known as the Old Town, or casco viejo.

In most Spanish cities, there will be two or three major buildings or places of interest. Almost always a cathedral, which will be Romanesque, or Gothic, or sometimes a mixture of both, if that’s your bag. Something else, like an acqueduct (Segovia) a mosque (Cordoba) or a castle (various). The central square, or plaza mayor, will be often quite grand (Salamanca). And clustered around, or in, these major draws will be bars, restaurants, and dozens of shops selling the local speciality souvenirs.

Now, these places won’t always be massively overpriced tourist traps which don’t offer good value food and drink, right? Right. You might decide, for example, it’s worth shelling a couple of extra euros for a beer, sitting in the sunshine in the plaza mayor, watching the world go by. But for eats? General rule – the closer to these major draws, and the more multilingual the menus, the less good value you get.

So where to go? Stretching out from these major draws, and often stretching between them, the streets will have been widened. They might even resemble avenues, and here you’ll find the commercial sector of the city – the fancy clothes shops, scary-looking high end chemists, lawyers’ offices, and banks. There may well be restaurants and bakeries, too, along these avenues, which will almost always be pricy, too. So where to go for the good stuff?

In my experience, you’ve generally got two options. Head out of the Old Town, outwith the original city walls, across a bridge, perhaps, to where the locals can actually afford to live – and eat. Or, in the Old Town itself, lose yourself in the back streets.

Often the latter option will take you into the Jewish Quarter, where the people of that faith lived centuries ago before the Christians kicked them out as part of one or other ethnic cleansing (don’t worry, this was a long time ago – the Spanish are, in general, pretty tolerant these days, although the current refugee crisis is causing some strain). In these narrow, corkscrewing alleys, there might well be the best restaurant or tapas bar in town – far enough off the beaten track to be able to have lower overheads, but not so far off that the locals don’t know about it.

And it was a combination of those options that led us to Calle Hermanos Barral, and two restaurants well worth recommending. Down the hill from the Acqueduct, not far from the bus station, we reached it via a couple of flights of stone steps and some unpromising side streets that held little in the way of anything. It was in the lee of the city walls, but not so far out of town as to be completely unreachable.

The first day we went to the restaurant attached to the Hotel Ayala Berganza, and had an excellently priced menu del dia in a patio courtyard that was just about warm enough to sit out in at this time of year. This showed up all the strengths and weaknesses of the menu del dia concept, which most Spanish eateries worth their salt will have: it had local dishes (the Segovians go big on their local white beans, for example) but a limited selection, and the price included a drink which, in the case of my wine, wasn’t the best wine ever, but wasn’t at all bad. The service was great, although the menu was delivered verbally at some pace, so had to be slowed down while I translated.

I had a beef stew which, I have to say, was the best beef stew ever, and that includes the ones I’ve slow cooked myself. The meat was tender, the sauce was rich, and it was accompanied by nothing more complicated than little circles of potatoes, deep fried. In terms of value, the meal was at least 50% cheaper than the menus del dia on the main drags in town, only 5 or 10 minutes’ walk away, and I guarantee you as good, if not better, quality.

The next day, after seeing the Alcazar (the castle that apparently inspired Disney’s one) and having a general poke around town, we found nowhere better than the other restaurant in Calle Hermanos Barral, La Codorniz. This time, we took a different tack with the menu options, and choice of drink for that matter. Suitably fortified by a bottle of Estrella Galicia (great beer, unfortunately very rarely on draft) I asked a local whom I’d heard discussing the wines with another table what he’d recommend, and he then took upon himself to order for us. A man of exquisite taste, as it turned out! 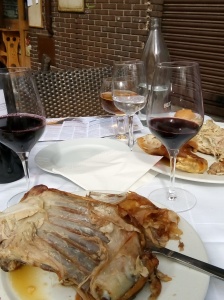 For eats, as the restaurant advertised itself as an asador, we tried two of the roasts on offer: the local speciality, cochinillo, or suckling pig, and lamb, another favourite in this area.  So far as the former’s concerned, don’t be put off by the pictures in the restaurants that show an entire baby piggie being served up: for individual portions, at least, you only get a bit of the rib cage, so you don’t have to look the poor beast in the eye when you’re eating it.

For afters, we tried the local delicacy Ponche Segoviano, a sort of orangey, creamy, custardy thing which probably had some booze in it. By then, suitably fortified by the Estrella and your man’s Ribera del Duero recommendation, I’d got into a lengthy conversation with a lovely Argentinian couple at the next table, so I wasn’t paying much attention to it. To be honest, it was hard put to follow the roast meats, both of which were absolutely delicious.

So that’s it, really. Segovia, like most, if not all Spanish cities, is full of hidden gems of restaurants, but often they’re not the first ones you come to. Head for the narrow side streets, or the newer part of town where the non-tourists eat. The menu del dia can be a good option, but not always: and eating off the main menu might be more expensive, but can bring its own rewards.

And if in doubt, have a beer and chat up a local.

P.S. Other places of note in Segovia –

Hotel Spa La Casa Mudejar turned out to be an excellent choice. Located just off the Plaza Mayor, we had asked for a room that looked out to the internal courtyard, and it was extremely quiet, and comfortable. Not the biggest room ever, but nicely done out and clean. Very, very, good value. Don’t know about the spa bit, as we ran out of time to try it – make sure you check its opening times. It’s definitely a spa rather than a swimming pool though.

Cafe Colonial, Plaza del Corpus – just down the street from the hotel – great traditional style cafe for breakfasts and more.

Diablo Cojuelo, Calle Juan Bravo – a bit further down the street that connects the Plaza Mayor with the Acqueduct, this is a deli with tables which has a whole lot going for it: lots of local produce, and not just the big white beans which, frankly, can lead to high winds later on; they produce their own off-denominacion Ribera del Duero, and the Diablo Cojuelo Rojo (there’s a younger black label, which we didn’t try) was the best wine we had in town. And the rest of them weren’t too shoddy.

The only thing that let this place down was the crammed cafe bit and substandard tapas. But still worth a visit for a copa of that wine.