‘Caceres?’ said the taxi driver taking us to the station at Segovia. ‘Why are you going to Caceres?’

I explained patiently that we enjoyed seeing different parts of Spain each time we came.

‘Well, there is so much to see,’ he agreed, as we careened through the narrow side streets, his castellano only slightly less rapid than his driving. ‘There’s Madrid, Barcelona, Granada, Cordoba…’

Madrid, Barcelona, Granada, Cordoba…’ I could have added many more, but it was clear your man – who could have been on a retainer from the Segovian tourist association, even though he’d originally come from the Basque country, apparently – clearly thought Caceres was an odd choice. Which, compared to Segovia, it maybe was.

That said, although we’d enjoyed our four nights in the Castilian city of water-carrying infrastructure, we were ready to move on. It was a good choice, and deserves to be seen, don’t get me wrong. But…

Last views of Segovia’s Plaza Mayor, and that acqueduct the Romans did for them

I think, to be honest, it’s both a winner and loser from its closeness to Madrid. It’s a great place for the Madrileños to have a day trip; it serves as a commuter suburb for the bigger city, but equally you could go out there from the Spanish capital at the weekend, maybe even stay the night, and be back for work on Monday.

It’s also (a bit the same way as St Andrews, say, as regards Edinburgh) close enough for the tour buses to include it on their regular itineraries. So the coaches can arrive from Madrid comfortably in time for coffee, the tourists can be funnelled up the spine of rock that connects the acqueduct, the Plaza Mayor and the Alcazar, and be parted from their money for lunch and souvenirs with ruthless efficiency, with time still left in the day to for the tour company to either return them to Madrid or move on somewhere else, like Salamanca, for an overnighter.

Toledo is the other place that springs to mind when thinking about Segovia: the proximity to Madrid, and its airport, means, with the high-speed train connection especially, they don’t have to try too hard to do quite nicely for themselves out of internal and external tourism, thanks very much.

Anyhoo. As I say, I’m glad we visited, but it was a good day to travel, with the train station at Segovia looking pretty much as dreich as Edinburgh airport had, if offering more in the way of background scenery. The rains had descended on Spain that day, and not solely on the plains, although as we crossed Madrid and took the slow train to Caceres, a landscape emerged that had clearly been praying for rain for some time.

There are basically three paces of Spanish train journey: fast, bloody fast, and quite a lot slower than either. Most of the main lines have now been made high speed, which gives you the option of the AVE (bloody fast) but also other trains like Avant or Alvia which, to be honest, don’t exactly hang around: at one point on the way down our Avant claimed to be topping 200 km/h.

The train to Caceres, on the other hand, was more like your average rail journey in the UK: loping along, stopping everywhere, and not in any hurry at any point. To give an idea of journey time, the train we got left Madrid at 10.25, was scheduled to get into Caceres at 14:19, and eventually rolled in about twenty minutes after that.

That said, even this more basic train – leaving from the commuter part of Atocha, which mainly hosts the Cercania network of commuter trains, but also those described as being of media/larga distancia, was comfortable, with a sight more legroom for the vertically enabled than most of the boneshaker rolling stock you get in Scotland. Which, given the relative amount of Viking genes in both countries, doesn’t really add up.

The taxi driver in Caceres (hot tip: they tend not to hang around in numbers at the railway station, so you may have to call them from the numbers on the sign if it’s a busy train) seemed a lot more laid back than his Segovian counterpart. Avoiding the standard conversational gambits for taxi drivers (thank you, Peter Kay) of ‘You been busy?’ and ‘What time do you finish?’ I went for the only slightly less predictable British gambit of the weather.

However, your man wasn’t concerned by the black clouds carpeting the country. ‘Ach, there’ll be a bit of rain, and then the sun’ll come back,’ he said confidently, and so it turned out to be. In the meantime, we were met at our apartment by the charming lady from BeHoliday, and initial impressions were (and remain) that we’d made a good choice: very comfortable and well located, the place had been a renovation of an 18th/19th century town house, retaining some original features but with all mod cons. 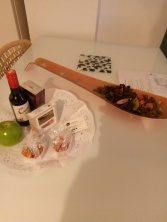 Caceres may not be Segovia, but I’m not sure it’s any the worse for it. That distance from Madrid maybe means it has to try a bit harder: although, to be frank with you, on the basis of a couple of very brief walks around town so far, its Old Town beats that of the more famous city into a cocked hat. Comparisons are invidious, of course, but the casco antiguo is really quite a fantastic, steepling thing, of churches, towers, and tiny side streets and alleys. Like Segovia, it’s a Unesco World Heritage Site. 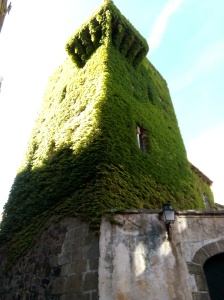 Some views. Better photos once Mrs F gets going with her camera 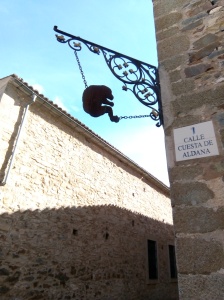 The tourist office was a bit weird, mind. We arrived the day before October 12, which is the Fiesta de la Hispanidad throughout Spain. Crudely translated, that means ‘Festival of Spanishness,’ or maybe ‘Festival of the State of Mind of Being Spanish.’ The Segovian taxi driver had warned us that everything would be very busy: his Caceres counterpart had, typically, been more relaxed about it: the lady in the tourist office, on the other hand, was certain that everything in Caceres – shops, restaurants, everything – would be closed.

This certainty might have been related to her keenness that we take a free bus to the Feria Europea del Queso or European Cheese Fair, which was to take place in Casar de Caceres on the 12, 13th and 14th. Casar de Caceres iis a village some distance from the town of Caceres. This, apparently, was the place to be on the morrow if you were a cheese fan.

As the day of the Festival of Spanishness dawned, however, or more accurately when we emerged from the apartment as the morning reached its late middle age, it became clear that rumours of the town of Caceres closing up for the day had been, er, wildly exaggerated. Indeed, the locals appeared to be quite determined to settle in for a day of celebrating their Spanishness, loudly, right here in the Plaza Mayor, and with some relish: we were just starting breakfast when a sizeable amount of the locals were getting stuck into their first beer of the day.

Caceres, at least on the evidence so far, seems a jolly sort of place. There have been a few miscommunications – it’s fair to say the accent is stronger here than in the Castilian heartland of Segovia – but they do appear to be trying to market themselves as something worth a visit. Apart from the stunning Old Town architecture, they’re also pushing gastronomy, and given that the region of Extremadura is famed for the jamón that comes from the pata negra, or black pig, as well as Pimentón de la Vera, the smoked paprika that informs so much of Spanish cooking, they have the raw ingredients to do that.

Their wines, too, on the limited research I’ve been able to manage so far, are rich, full, and satisfyingly different from either Ribera del Duero or Rioja, the staples of most bars in most parts of Spain. More research will be undertaken.

One thing we hadn’t expected was the willingness on the part of local chefs to try something beyond the usual Spanish flavours. A leaflet we picked up at the tourist office from the Cheese Fair-promoting lady had claimed this, but I was dubious until, returning from our midday walk, we were to find a whole new café that hadn’t been there yesterday had sprung up, on the day everything was meant to be closed.

I lay before you, ladies and gentlemen of the jury, Exhibit A: brochetas de pollo con salsa thai de satay. Chicken kebabs, or brochetas, are a staple of Spanish cookery, especially in the South, where the Moorish influence encourages use of Middle Eastern spices like cumin. But Thai flavours and a satay sauce? On the day of celebrating the state of mind of being Spanish, this was a whole new twist!

More from the culinary – and oenological – front line soon…

Just adverts there be down here