A Day of Remembering 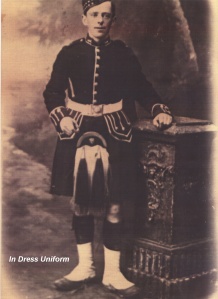 Time’s a slippery thing. In many ways, it seems incredible to me that World War One ended as much as 100 years ago; perhaps that’s because, as a child, I knew a grandfather who had fought through it.

Charles Leslie Anderson’s story was well told by my father, his son in law, in A Huntly Loon Goes to War (Loon meaning lad in Aberdeenshire dialect, in case you wondered). I have a dozen copies of the booklet left, and I’ll gladly sell it at a post free price to anyone with whom this story strikes a chord.

Charles’s tale is possibly typical of some, at least, of his generation: born out of wedlock in rural poverty, outside the small Aberdeenshire town of Huntly, using education to make something of himself as a young man (he was a 25-year old butcher when war broke out) and then the four years in the trenches, seeing all the horrors that are being remembered today, and surviving wounds that – but for the grace of a young doctor and his wife’s instincts – could have left him a double amputee.

His post-war journey to being a hard-working man of property, running two shops at once in the town at one point, and even becoming a bailie (councillor) again is reflective of a collective will after the so-called ‘Great War’ to give the surviving soldiers a chance to rebuild their lives.

One of my favourite stories in the book is that, impressed with Charles’s character, his superiors wanted to give him an officer’s commission (at one point he was acting as a sergeant). This was quite something, given his humble origins, and the class-ridden nature of the Army then. Charles turned the commission down. His reasons were entirely practical: the lieutenants were the ones given a handgun and a whistle and expected to go over the top first. There’s heroism, and then there’s just plain daft!

Charles suffered horribly during the war, including from the effects of chlorine gas. This wasn’t anything I understood as a child, when the only eccentricity of this mild-mannered man was a complete inability to put up an old-fashioned deckchair, the inevitable result of which was for him to throw the thing down in disgust, much to the rest of the family’s amusement. What I heard later was that his wartime experiences gave him nightmares for decades afterwards, and his other eccentricity – going out to bang nails into the wall of the shed when some domestic matter raised his temper – would probably nowadays be classed as a symptom of PTSD.

A piece in the Times this week brought back another family memory: writing about another, even more remote part of Aberdeenshire called the Cabrach. It told how the area became a virtual wasteland after WW1 as most of its menfolk were lost in the conflict, and the remaining women and children were forced to seek work of some sort in the Scottish towns and cities. (According to my sister, my Dad’s research indicated this drift away started in the previous century).

Interestingly, the article related how many of the men from country regions like the Cabrach died, not in action, but from diseases which they hadn’t encountered but which their town and city counterparts had some immunity to.

The other point of interest for me in the article was the mention of one William Taylor, because my Dad’s researches had also uncovered family links to the Taylors of the Cabrach, who had gone off to fight in many 19th century wars for King and Country long before 1914.

Maybe it’s just that Scotland’s an old, old, country, and a small one, that I feel such a connection with the previous generations. Much of it, I suppose, is down to that childhood connection with my grandpa, who took a keen interest in teaching his younger grandson about such things as cricket and gardening (particularly the pernicious nature of weeds).

Whatever our connection with that generation, and however distant it might now seem, we do well to remember them today, and the senselessness of the suffering they went through on all sides. 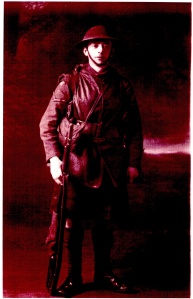 Charles Leslie Anderson in full battledress. Above: in the dress uniform of the 6th Gordon Highlanders.