I’ve decided that, when it comes to Culture, with or without a capital ‘c,’ I’m what’s called middlebrow. I don’t get most modern art (or non-modern, for that matter): if pushed, I’d name the Surrealists, Pop Art and the Secessionists, the latter probably because of their link with Charles Rennie Mackintosh, and all of them likely because of the bright colours.

Literature-wise it’s the same. I do insist on some sort of basic facility with words, but give me a well-written thriller any time over some Booker Prize pile of pretension any day. Ditto poetry: Larkin, the Beats, the easy to read stuff. And non-fiction these days over the lot.

As for music, well, again I expect the lyrics to generally be about something, but if the music’s straight four to the floor rock and roll, guitars front and centre, all the better, frankly, for yours truly.

Which is probably why I never listened to my first pick of June, 1979’s albums: Robert Fripp’s Exposure. I’m listening to it now, and realise I’ve been missing out. Note to self: push yourself to listen to the more experimental stuff! The story of the making of the album, and the involvement of yacht rock god Daryl Hall, is interesting in itself: here’s the Wikipedia link. 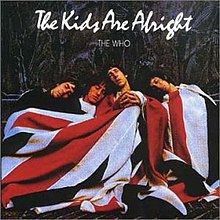 Elsewhere, I could hardly ignore this month’s release of The Kids Are Alright, the soundtrack album that serves as a pretty decent greatest hits album for the Who. Any record that’s got ‘My Generation,’ ‘I Can See for Miles,’ ‘Pinball Wizard,’ ‘Baba O’Riley,’ and ‘Won’t Get Fooled Again,’ to name but five, is alright by me.

In fact, how on earth do I not have a copy of it? Must try harder, Ferguson. I did download the last of these tracks the other day, having decided my mobile couldn’t exist without it.

Lastly, and most controversially, Communique, by Dire Straits. Yeah, I know. I don’t care. There are some good songs on that record, and while it doesn’t match up to their debut, it got a lot of play from me when it first came out.

Plus the riff on ‘Where d’you think you’re going?’ was one of the first things beyond basic strumming I learned on guitar. So there.