Ok so this is going to be fairly brief, with some more bonny pictures and a few recommendations of where to eat and drink: 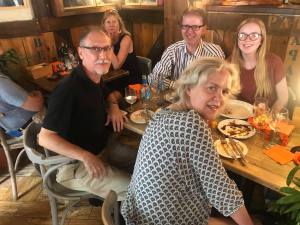 El Patanchon, Calle Mateos Gago, at the corner of Calle Angeles, recommended by our Spanish ‘cousin’ Guillermo (that’s the distinguished looking one in the photo) was a really good meal; quite central, but good value and a friendly, welcoming atmosphere.

Guillermo’s other choice was to have been Mi Angeli, a long-established Italian in Plaza de la Alfalfa. It’s a curious thing that, in all the Spanish cities we’ve been in, almost no other national cuisine gets a look in. Other than the Italians. I’m glad we went with the Spanish option. 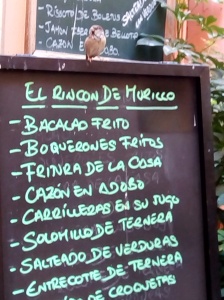 We also had several really good meals at the bar across the street from our accommodation in Calle Lope de Rueda,

El Rincon de Murillo. Good food, good wine, cheerful and helpful staff. What else could you ask for? Plus you get to sit and watch the walking tours go by (the street is nicknamed ‘the kissing street’ because it’s so narrow, the neighbours could if they so desired give each other a smackeroo by leaning over their balcony).

So far, I’ve concentrated on the Santa Cruz area – naturally, since that’s where we stayed. However, the other area you’re always directed to in the guidebooks is Triana, usually called something along the lines of ‘working-class’ or even ‘edgy.’ To be honest, the three times we’ve been to Seville, we’ve never found it all that edgy, but maybe we’ve not penetrated far enough beyond the main streets to experience its true character. Interestingly, Guillermo admitted that he never found a reason to go to Triana, and indicated that it was a somehow set apart from the rest of the city – a bit like Leith holds itself apart from Edinburgh.

There are two bridges that take you to different ends of Triana. Puente de San Telmo, further downriver, takes you to a line of waterside restaurants at that end of Calle Betis (yes, football fans, this is where Real Betis comes from, in green and white, like the Leith team). You can sit on the river side of these restaurants and get charged terrace prices; if you’re a canny Scot, and feel you saw enough of the river crossing it, you can eat in the same restaurant across the road for much less. Just saying. 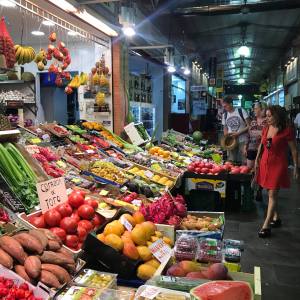 Further upstream, the more antique-looking Puente de Triana takes you to the heart of the district. A broad, pedestrianised street opens out in front of you, now absolutely full of cafes and bars looking for your trade. However, the last time we’d been there we’d discovered that a sharp right turn into Calle Callao soon brings you to a bend in the road with a number of really good tapas places. Looking at Streetview, It appears that the one we went to was called Mala Bicha, but I think I’d remember that. Choose any one of them and you’ll do fine.

Before or after lunch, be sure to have a stroll round the covered market – just off the bridge and down to your right as you enter the district. In common with most Spanish towns of any size, the central mercado is a wonderland of fresh produce – check out those tomatoes called ‘bulls’ hearts’ in the photo. All sorts of knobbly veg that would never get shelf space in a British supermarket, and tastes ten times better than anything that would. Proper fishmongers and butchers with big knives ready to carve up something that was recognisably alive a short time ago. Proper cheese that smells like cheese. I could go on.

Seville is a brilliant place. In these two blogs, I’ve only scratched the surface. Go yourself and do a deep dive into the heart of Andalucia. You’ll come up for air a better version of yourself. 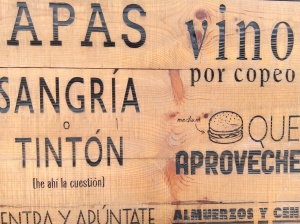 The adverts down here probably aren’t even Seville-related. That’s not what you came for, is it, non-Seville related ads? Thought not.