Biden his time – a love letter to America(na) 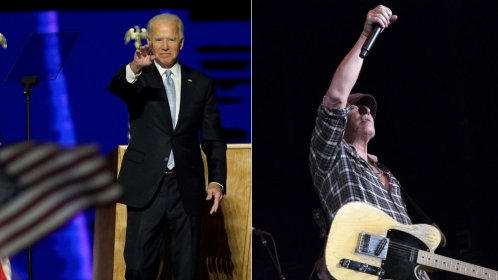 So, then. Are we safe to say good ol’ Joe’s won yet? Quite the rollercoaster, eh? And who knew it depended on the guy in the back room of CNN (and not Fox News) calling it to make it official? Did I get that right?

Semi-seriously, whatever the result (I don’t want to jinx it) my thoughts and prayers are with the poor bozos still counting. I hope they let them out for a smoke and a Hershey Bar at least every 12 hours. I also think of the other poor bozos charged with administering the election, especially those now under threat of legal action. I’ve only been in that position as election lawyer once, in that North East Fife Parliamentary a couple of years ago that went down to two votes (they backed off, after a lot of huffing). Let me tell you, poring over obscure bits of electoral legislation at 4 in the morning when you’ve been up since 5 the previous morning isn’t my idea of fun. I won’t be doing that again.

Anyways, I really hadn’t planned to tie in the release of my EP, Heading for the Heartlands, with the US elections. I

saw a Bandcamp Friday on the horizon and decided that was the date I had to stop footling about with the mixing and mastering and get it out there.

Although it’s only an EP, it’s actually the product of more intensive work than I’ve put into whole albums in the past – I was determined to get the engineering and production of it right. The first version of ‘Copper Wire’ I recorded, for example, was back in July. Not quite Springsteenian levels of perfectionism, but much more than usual for me. I appointed several musician pals my critical friends, and their feedback helped immensely in honing the tracks further.

Speaking of Springsteen, there’s more than a hint of the Sage of New Jersey in the music – particularly in the final track, where said critical friends were among the crack E Street Band I assembled for the amped up version of ‘Copper Wire.’ The quieter two songs, too, are in that Americana style Brucie uses sometimes; and the lyrics tell a story, the way songs should. Think of it as my love letter to America – it could do with some love right now, I feel.

Here’s the thing. I’m proud to be Scottish. I’ve no desire to be American, with the greatest of respect and love to my American friends. That’s why I try to sing with my own accent, for goodness’ sake.

So why is it my musical soul is tied to the back of a pickup truck and dragged feet first across the United States, from the most lonesome highway to the broadest of Main Streets?

I’ve written on this topic a few times before: it just is, though, and these songs travel across my musical America, starting somewhere near maybe one of the folky mountain streams that goes into the rock n’ roll delta with ‘Heartlands.’ 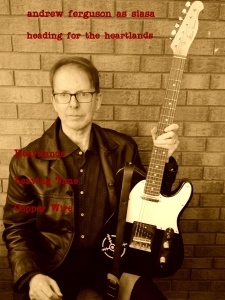 By ‘Leaving Time,’ we’ve reached a city and bought a Telecaster, albeit still travelling light in terms of musical companions. Lastly, with ‘Copper Wire,’ we hit a downtown bar, with that E Street Band of mine!

In reality, do the songs sound like Bruce? I might get done under the Trades Descriptions Act if I said so, although I have aligned some of the instrumental aspects of the arrangements to something I think Bruce would approve of. It’s more that they are – despite being in a Scottish accent – in that tradition of telling stories of ordinary people at a moment of change that Springsteen is a master of. ‘Copper Wire,’ for example, could be based in one of the Rust Belt States, although it’s actually drawn from something I saw in a documentary about my home town here in the Scottish Lowlands.

Anyway, enjoy. The EP is available on Bandcamp, and all proceeds go to Fife Women’s Aid, which will yet again be gearing itself up to cope with the increased levels of domestic abuse that have been reported during lockdown the first time around. As we head into winter, whatever the levels of restrictions remain at in Fife, you can be sure there are women out there in need of help (I’m aware of course that abuse is not always gender-specific, but it generally is).

Yesterday I picked up my guitar and another song fell out. I’m hoping this EP will grow in time into a complete album. In the meantime, enjoy!

PS: the EP is three tracks, but if you buy the whole thing you get a bonus track and a lyric booklet with lots of cool pics of Americana. Plus a great one of a Heiland coo. That Bandcamp link again: it’s here