How Not To Watch A Football Game (I mean, the kickyball soccer thing, not the other heavily armoured American thing)

So. Regular readers of this blog will know that we (myself and the Redoubtable Mrs F, that is) are in the throes of moving from our suburban semi in the boondocks of Fife to a flat in the suburban, and yet perfectly located for the centre of town, Edinburgh district of Blackford.

Unfortunately the organisers of the European Kickyball Championships had failed to factor this momentous event into their project planning. Which is why, on Friday, I found myself in a sparsely furnished flat in Blackford which, amongst the sparseness of its furnishings, didn’t have a television, on the night of THE MOST IMPORTANT GAME OF KICKYBALL EVER IN THE HISTORY OF THE WORLD, namely England v Scotland, in the group stage.

What to do? In the rush to get over before the City Bypass clogged more heavily than a 50-a-day-man’s main artery, I’d forgotten even to record it. So I decided to ignore it. I tweeted somewhat sanctimoniously to the effect that, after 58 years of living through Scottish football’s inevitable story arc of heroic failure (with the occasional bout of foot-to-the-floor ignominious failure) I had suffered enough. I was going to NOT watch it.

Fat chance, of course. Even with the windows only open a tad, the air hung heavy with the cordite whiff of national expectation. Even before kick off my sister had Whatsapped me about it. Then Daughter and Heiress joined in. In the distance, my ears began to become hyper-sensitive to the howls and groans of people who did have a telly.

About half an hour in, and in medio of some excellent food and wine, I cracked. Google sneakily suggested I might want to have the live score, floating on the face of my phone. I did, didn’t I? I could just occasionally check it. The score right then was 0 – 0.

Meal eaten, a sensible modicum of wine taken, the plates cleared away, the game still wasn’t over. Expectation and agony flickered in the air outside like will o’ the wisp lightning balls. Muffled curses and groans filtered through the walls and floors of our block from the legions of the watching damned. What to do?

Fortunately, I had recently been reading Nick Hornby’s 31 Songs, in which the High Fidelity and About A Boy author discusses his favourite ditties. I might not agree with all his choices and judgements, but I thoroughly recommend it to anyone as a very insightful and amusing romp through some of the great rock and pop songs (and some lesser known ones too). Another writer would have turned it into a stand up routine, and there are lots of places where I’m chuckling knowingly.

I was particularly struck with his loving dissection of Springsteen’s ‘Thunder Road.’ Like me, he loves it, while accepting not everyone will. It’s overwrought, he says. It uses the word ‘redemption’ in a song about redemption. He points out its four and three quarter minutes formed the foundation stone for Jim Steinman and Meatloaf’s entire career. Further, he says, ‘if doomed romanticism wasn’t corny in 1975, it certainly is now’ (writing in the year 2000).

It’s just such a bloody brilliant song neither I, nor Nick Hornby, can live without it. So, writhing internally with the agony of not knowing the score (except I’d just checked it, and Google, that unreliable narrator, said it was still 0 – 0) I started casting around Youtube for versions of ‘Thunder Road,’ finding the clip I’ve added below.

This was very good, for three main reasons:

Bruce describes where he stayed when he was writing the songs for the album ‘Born to Run,’ and how this one, ‘Thunder Road,’ had a difficult gestation. He tinkles a bit on the piano, and says how the song is his ‘invitation card’ to the rest of the album. As Hornby notes, the elegaic quality of the song means that it’s counter-intuitive that it should be the opening, rather than the ending, of the album, but the Boss knows what he’s doing –

I check my phone. Still 0 – 0. Don’t dare to hope. Those hopes have been crushed more times than even Bruce Springsteen has sung about crushed hopes and broken dreams

I should explain, for those not of a kickyball persuasion, that England, a country of around 55 million, has, had on the night and will continue to have, every legitimate expectation of humping Scotland, a country of 5 million, whose worse dietary and drinking habits than its southern neighbour, higher levels of average poverty, and historic under investment in proper training facilities for its youth footballers, are only slightly offset by a fanatical desire not ever to be beaten by England; anyway, back to Bruce:

The screen door slamming in the first verse, he explains, carries all sorts of resonances for him from his childhood – escaping to play, escaping parental disapproval; the mention of Roy Orbison, too, is freighted as Bruce tells us he was striving on the album, not to sing like Roy Orbison exactly, but to catch that operatic sentiment that Orbison had.

‘So you’re scared and maybe you’re thinking we’re not young any more…’ Springsteen points out, with a chuckle, he was 24 when he wrote that line

Back in the room with Bruce. The song was written two years after Vietnam, when no one was that young any more. He sings a bit more and jokes about how Catholic the line about making crosses from your lovers is. Everyone laughs, no matter their denomination. Bruce gets to the big accelaration, fluffing a chord just before it. Everyone laughs along with him again…

The night is indeed busting open. These two lanes can take us anywhere, even to a land where Scotland can somehow hold England to a nil all draw, leaving the hope of redemption in the final group game.

Bruce jokes about the line about learning to make his guitar talk being probably the hokiest line he ever wrote. Oh, Bruce: if you only knew how much it made the seventeen-year-old me yearn to make my guitar talk…

Still 0 – 0. Two minutes of stoppage time added on. Will the torture never end. Will the damned, wailing and gnashing their teeth throughout this benighted land, never escape this purgatory and find redemption?

‘Tonight we’ll be free, all the promises will be broken…’ Bruce comments, ‘Well, it’s like all bets are off. It’s a new day.’ Then, consummate performer that he is, Bruce brings the song home. Not watching the game, there are actual tears in my eyes. 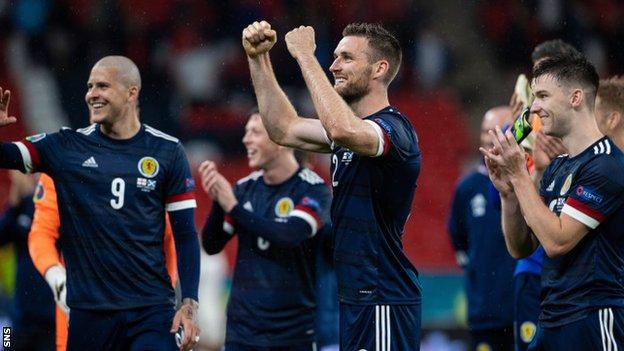 For those of you supremely uninterested, the game ends 0 – 0. In common with Scotland’s previous attempts to qualify out of the group stage in major footballing tournaments, that means we have to win our last game (against Croatia tomorrow) and even then we might not qualify. It’s all down to hard sums and goal difference.

But then, as Bruce so memorably puts it, clearly with the group stage of the European Kickyball Championships in mind, ‘it’s a town for losers and we’re pulling out of here to win.’