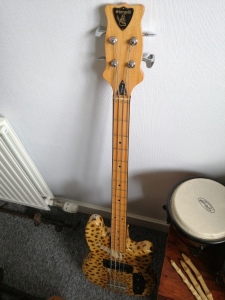 I’ve posted before about bass guitars, and my lack of a relationship with them. I think part of the reason might be neurological – I think my hearing range tends towards the higher end, so I’m hearing with an emphasis on the treble. Any of you boffins out there like to comment on that?

Of course, there’s also the rock n’ roll stereotype of the bassist being the emotionless bloke at the side of the stage who plunks away while the lead singer and the lead guitarist get all the attention: John Entwhistle, Bill Wyman and John McVie spring to mind, despite their off-stage antics. Who wants to be Bill Wyman though, especially now?

For whatever reason, I have to force myself to listen to what’s happening down there, and my usual solution is to throw the track at one of my bass-playing buddies, Mark Allan or Norman Lamont, and ask them to stick some bass on it. However, I’ve always fancied a bit of a go, so finally took the step of borrowing Mark’s second best for a try.

As befits the bass guitar of someone whose nom de punk is Isaac Brutal, the instrument

has been, er, well-loved. Or f*cked, to use the musician’s term. The leopard-print finish has been attacked, it would seem, by some large-clawed animal, perhaps a leopard enraged by the biological intellectual property theft. Tone or even volume controls? Nah. Long gone. However, it produces a signal, which is all I need it for.

So, with thanks to Mark for the loan, here’s the latest incarnation of one of the tracks on my forthcoming album, with my attempt at a bass part on it. Proper bass players, be kind!

And yes, I have heard of Sting and Paul McCartney. I am also aware of Tina Weymouth’s work. They’re the exceptions that prove the rule!