The View From Blackford Hill

When my Fife pals ask me where I actually live in Edinburgh now, and I say Blackford, they often look vague. Easily confused with Blackhall, which is on the north side of town and on the Queensferry Road which brings said Fifers into town by bus and car, it’s actually on the south side of town. I’ve always been a Southsider at heart, ever since I lived in nearby Newington as a student (I also lived in Canonmills for a year, so you can’t say I didn’t try the New Town too).

Anyhoo. This isn’t all about me, despite appearances. But, were I to describe how to get to my new gaff on foot from Princes Street or Waverley Station, the main landmarks that visiting Fifers use, it would go something like this: Go up the Mound, and instead of going right or left onto the High Street, go straight on, onto George IV Bridge, where a recent neighbourhood fire has closed the Elephant House, supposed wellspring of J.K. Rowling’s wildest imaginings (although another cafe on the Bridges was as much her kind of place when she was dreaming up Harry Potter, apparently).

Then keep straight on, taking a right fork at Bedlam, the old madhouse, and cross the road to the approach to the Meadows. On your right, the former Royal Infirmary, now know as the Quartermile Development, where glass monsters clamber on the old stonework in an uneasy symbiosis of medical heritage and modern architectural wankery. Straight ahead, one of the paths through the highly prized – and fiercely guarded – common good ground of the Meadows.

Once the site of the Burgh Loch, or Boroughloch, much used by brewers, it was drained in the early nineteenth century to form the pleasure grounds of today. At the other end of the path straight ahead, Marchmont, an area originally built for the lower middle class clerks and admin bods needed for oiling the wheels of commerce and local government later on that same century, and now a mix of local residents and posh students, whose mummies and daddies are about the only people who can afford a three bedroom flat there now.

Pausing for a coffee at the Empire cafe (much better value than the Birchwood next door) you’ll cross Grange Road, and start downhill just as the property prices mount even higher. This is the Grange, where the communal living of the Marchmont tenements gives way to what Stevenson rather sniffily called ‘the Villa Quarter.’ He wasn’t a fan, although there are some beautiful sandstone buildings, that you can just about glimpse behind the massive walls that surround them to keep the Fifers out.

Hang a left at Grange Loan, continuing downhill, and you’ll get to a crossroads with the very attractive Reid Memorial Church ahead of you. Cross the road to get to it and you’re in Blackford, a much more mixed residential suburb than its posh neighbours. You’d go left and then right for our street, but if you went straight ahead instead, you’d start climbing Blackford Hill. If you’ve got the puff left (hilly place this, isn’t it?) I’d recommend it, especially on a clear day.

Blackford is one of the seven hills Edinburgh’s built on, although one of the 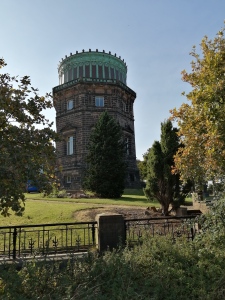 great attractions of it is that, although there is some housing clinging to its northern and eastern slopes, it rises above the city and you get some excellent views. There’s a reason why they built the replacement Observatory for the Calton Hill one here.

Built in 1896, it’s a beauty – although light pollution has somewhat inevitably limited its options nowadays. But the views around it, even at ground level, are worth the climb on a clear day.

Most obviously of course you can look north, back the way you came, and take in the

centre of the city: the madman’s dream of the Castle Rock dominating the landscape, as the nearest of the extinct volcanoes that you can see all around you (geologically what’s called crag and tail, don’tcha know, with the crag in this case being where the castle’s at, and the Royal Mile, or High Street, running down the tail of hard volcanic rock the glaciers scraped past).

Just as important to Blackford’s newest residents, in a way, though, is

the view in other directions – where, although there’s city reaching out southwards to the east and west, there’s also farmer’s fields, a golf course close at hand, and, of course, the Pentlands in the distance. Ally and I both grew up on the edge of a town, and although Blackford is perhaps the outer edge of the inner suburbs, the presence of the Hill, and the nearby pond, give us that feeling that we’re on the edge of the city.

Once you’ve taken in all the views you want for one day, be sure to pop in on your way back. If all this climbing has worked up a thirst, we can take you for a drink at our local.

It is uphill, mind.