The Sceptic Psychic – A Christmas Ghost Story (Sort Of)

I’ve discovered podcasts are a thing, quite recently – who knew? Well not me, obviously: I must have missed the memo. A frustrating ongoing tussle with my Bluetooth speaker, which sullenly refuses to connect with my phone, meant I was looking for something other than music to listen to as I washed the dishes or prepped the evening meal (but not multitasking both at the same time. I’m a man, for goodness’ sake).

BBC Sounds is a great source of podcasts, and one of them is Uncanny, a podcast 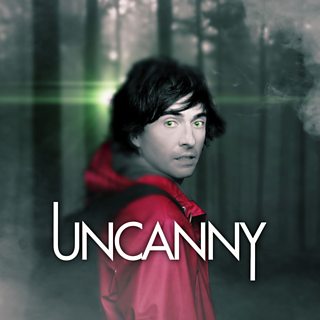 featuring Danny Robins as presenter, which looks at various tales of supposed psychic phenomena, discusses them with both believers and non-believers, and then invites listeners to chip in. This last feature seems to be especially useful, as for example in the case of the Belfast tower block, where a subsequent episode retailed the stories of various people who had stayed in the same University accommodation and had similar experiences.

One aspect of this series that appeals to me especially is the presenter’s style. Like me, Danny Robins is neither a fully bought-in believer nor a dyed in the wool sceptic. A part of him wants to believe, but equally he’s keen to get a scientific explanation for events. These can, at times, seem just as intriguing to me as the paranormal explanations, for example the discussion of how the cables pulling a lift up and down its shaft can set up resonances and harmonics, like giant guitar strings, which can then influence the environment around them. I’d have liked longer on that, to be honest.

A long, time ago, when blogspot.com was still the place to do blogs (i.e. 2005), I set up one called ‘Sceptic Psychic.’ The email address it was associated with has long gone the way of all flesh so I’ve kind of lost contact with it: this blog is a way of reconnecting with it (I’ll probably reproduce it as a page). Those of you looking for startling tales of the supernatural are likely to be disappointed: it’s a fairly unexceptional set of experiences. The stand out one for me now would be the Culloden one, in terms of still making the hairs stand up on the back of my neck, as well as a strange emotional response to it when I tell anyone about it.

So what does a sceptic psychic believe? Good question. The truth is, I want to believe, to quote the X-Files. I especially want to believe in life after death, now that so many people I’ve known and loved are no longer physically here. At the same time there is a big logical, rationalist, lawyerish part of me that thinks science is the best paradigm for reality we’ve got, and that as long as explanations within that paradigm exist, I should accept them.

I’ve not had that many strange experiences since, although given the old blog only relates 8 things from the first 44 years of my existence, I guess the fact I’ve had a couple  since is more or less in line with a couple every 10 – 15 years.

For example, I don’t think I got around to writing up the Vaults experience on the old blog, but basically there’s a bit of the tour of Edinburgh’s underground vaults where they

separate the men and women because the unquiet spirits on one side of the room attack women. So they get put on the other side, obviously. I mean, we’re not savages.

Looking back much of what happened was probably just some of the guys horsing around, but the main horse did report weird stuff happening to his watch when he got home that night. It certainly wasn’t a place I’m in a hurry to go back to.

The other two since have been a bit more personal.

One of these I can date fairly precisely to Spring 2014, when my sister and I were tending to our late father’s garden, keeping the place tidy before the property could be put up for sale. I half-turned – and was convinced I saw, out of the corner of my eye, Dad watching us from the back door. When I turned fully round, of course, he was gone.

Wishful thinking? A hallucination common to people processing grief? I wanted to see him there, that’s for damn sure.

The other experience was a bit more odd, in that it was completely uncalled for. I’d experienced – once – the healing power of reiki, and wanted to see if it could help my back again (I should stress that this is the only type of New Age-y non-medical intervention I believe in, and it was from direct experience). This would be about 2012, after my mother’s death but while my Dad was still around to tell. I was put in touch with a woman who used to work at the Council, and who did reiki, so I was told. She lived in Leslie.

The woman, who seemed perfectly normal and not at all fey, led me to an outbuilding in her back garden where she did her reiki thing. Except she spent about five minutes doing reiki before she told me she was also psychic, and there was someone from the Other Side that wanted to talk to me.

Now. I don’t dismiss psychics out of hand. I know all about cold reading techniques, and other ways that they can fake the knowledge they claim to possess from the dearly departed. If I was pushed, I would say even the genuine psychics (if such creatures exist) might have to use these techniques some of the time, because these kinds of powers can’t be turned on and off like a tap.

Whatever. I hadn’t gone there for a psychic. I had gone to get my low back pain looked at, and I wasn’t really very receptive to being told the spirit wanting to get in touch was ‘an older woman.’ I was determined not to give anything away. Despite myself, however, I did admit that Mum had recently passed away. I can’t honestly remember that there were any mind-blowing pieces of information relayed on that convinced me I was speaking to my mother. However, the psychic did offer the information that people with Alzheimer’s had their spirits cleansed, so that they came out the Other Side in a pre-Alzheimer’s state.

Believe that or not if you will (obviously, something again I very much wanted to believe). However, the weird thing about that experience that I cannot explain is what happened aurally as I sat in this woman’s extended shed in the back garden of an ex-council house in Leslie. As she spoke about my Mum’s spirit, the area off to the right of us started making this… cracking noise. You know when you make a gin and tonic, and put ice in it, right? Like that. Exactly like that. Except much, much louder.

It was the damnedest thing. The woman, of course, said this was often what happened when the spirits came through, but then she would, wouldn’t she? It’s possible she had got her husband out behind the shed making a bathful of gin and tonic with ice, but it seems unlikely. Do please comment below if you happen to know it is a common phenomenon, or even if something similar’s happened to you.

And that’s it, really. Apologies if you were hoping to have your socks knocked off by some outstanding paranormal jiggery-pokery in this post. Or if it’s really not your thing and you think it’s all a lot of tosh. That’s a perfectly rational, reasonable position to take.

But if it strikes a chord, I’d be happy to hear from you.