His Latest Flame: Story of a Lost Band 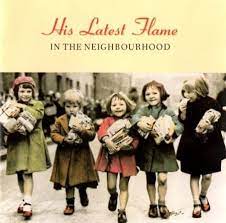 Highway 61, that ever-rolling highway of rock n’ roll, is littered with the burnt-out wrecks of coulda shoulda woulda. The story of Scottish popular music, in particular, is full of chancers who hotwired the blues, left a trail of burning rubber on the side streets, and then, inevitably, drove their stolen three-chord fastback way too fast and ended up off the road, upside down in a field outside Cambuslang, forever doomed to future obscurity.

The band I’m going to tell you about now is different from that trajectory, however much they’ve ended up in the burnt stubble with the other upturned Chevrolets. This is an all-female, Glasgow, band called His Latest Flame who rose, briefly, in the mid 1980s. and produced one album, In The Neighbourhood, in 1989, before calling it a day in 1990.

The album was how I came to them: I’d probably heard one of the singles from it, ‘America 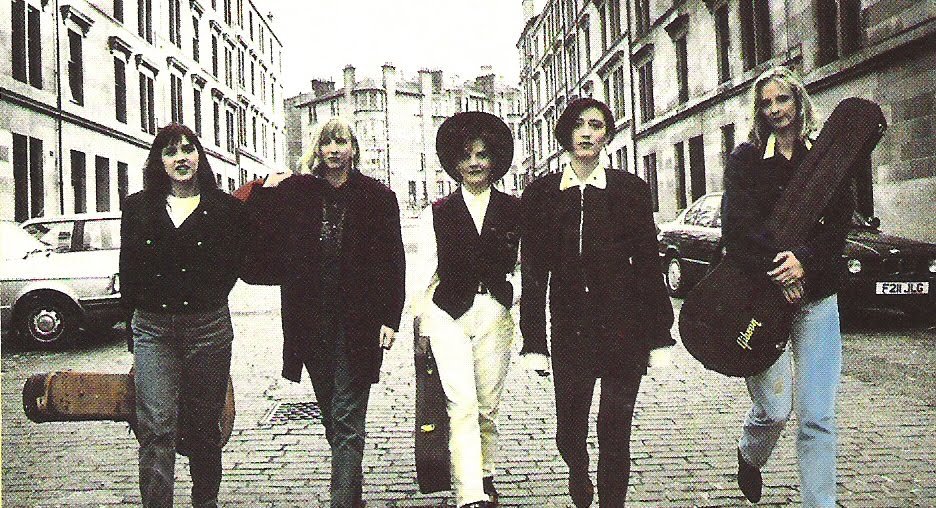 Blue,’ and bought the album on the strength of a) the single being really good and b) them being Scottish and all. The rear cover of the album, with them all looking like cool cats straight out of Glasgow College of Art, probably helped too.

So let’s start with the album, even though that’s the end of the band’s story in a way. A bit of Google research leads me to a music blog, Mine for Life, and a post about the album – of which more presently. Meantime, it quotes Q Magazine, from the time of the album’s release:

“This is His Latest Flame’s debut album in a chequered career spanning the best part of a decade. As agit-popsters Sophisticated Boom Boom they recorded a John Peel session, but never graduated to vinyl. A name change and a contract with Go! Discs failed to rouse the record buying public, despite some fine pop tunes, leaving them in the unenviable position of being patronized as an “all-girl group” by some and pilloried by others for growing out of their monkey-booted adolescence.In The Neighbourhood presents a new set of songs which betray the band’s growing maturity. Relying on a solid pop/rock formula, Moira Rankin’s mannered vocals benefit greatly from some imaginative four-part harmonies, particularly on “America Blue” and “Take It In Your Stride”. Fame and fortune may elude them yet again, but these factors do not disguise the quality of His Latest Flame’s songs.” (Lestyn George, July 1990)

Let’s start with the title track:

Here’s another single (no offence intended, American pals – bear in mind this was written during the Reagan years, when feelings were running high about the Cold War and all that)

The comments below the blog entry in Mine for Life are full of interest for anyone looking for more info. Lots of local fans remembering great gigs in Glasgow, Edinburgh, East Kilbride, Dunfermline, and Cambuslang I shouldn’t wonder. Most poignant of all, is a couple of comments from Moira, the lead singer, asking the rest of the band to get in touch as she’d love to play with them again.

A cracking debut album. An appearance, apparently, on Wogan, then the top BBC chat show, and some plays at least on Radio 1, according to the comments on the blog. So what happened?

Another website, Discogs.com, reveals what may have been one of the straws that broke the camel’s back. Notice a slight difference between the first and the second tracks I’ve put up, in production style and instrumentation? One reason for that is that I’ve cheated a bit and put the single version of ‘Neighbourhood’ up, which was a single released on Chrysalis in 1986. The version of ‘America Blue’ is from the album, released on London Records and with a different producer. But that’s not the only difference.

I have to admit, I prefer the album’s sound to that of the single. It’s crisper, with all the instrumentation well articulated. I hate the sound they’ve given to the harmonica, but that’s probably just a personal thing: it has that very 80s harmonica sound that features on Culture Club’s ‘Do You Really Want To Hurt Me?’ Otherwise, the producer has avoided the very 80s thing of slathering everything, even guitar-driven rock, with cheesy synth.

But. Discogs.com also has the credits, and while the girls are there, listed as ‘performers,’ the musicians are a bunch of session men. And yes, I do mean men. His Latest Flame are not the only band to have gone down to London with a record deal only to be told they’re only needed for the vocal sessions – the same happened to Midge Ure’s first band, apparently – but given the gender difference, it just feels especially… wrong.

Why did this happen? It wasn’t that the band couldn’t play: it’s just that the producer would know the session men, they would know him, and it could all be knocked together much more quickly without any creative input from the people who actually created it in the first place, thereby saving on studio time.

Please don’t let that put you off the album, by the way. The band – principally Tricia Reid, but the others also share songwriting credits – created the songs, and, as the review says, one of the main strengths is the four-part harmonies they did themselves.

So was that the straw that broke the camel’s back? Truth is, I don’t know (but if you do, please write in). Maybe they just failed to bridge that gap of being successful pop rockers like the Bangles whilst writing incisive, political songs (check out Londonderry Road, for example). Maybe they got fed up of schlepping to East Kilbride, waiting for that next John Peel session. Maybe life – marriage, kids – got in the way, just as it does for some male musicians.

At least we’ll always have In The Neighbourhood. And it’s still getting played, leastways round these parts.

…and assuming you’re maybe new to this blog, I’d love if you’d spend a moment listening to another Scottish musician, trying to keep the flame of indie music alive! My solo project, Songs In A Scottish Accent, (SIASA for short) tries to give a modern Caledonian twist to Americana. My latest EP is on Bandcamp here, if you’d care to give it a listen. All proceeds go to the Red Cross for the Ukraine.