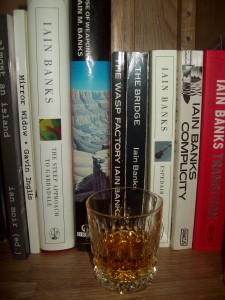 A lot of people knew Iain Banks better than me, and a lot of words have been written about his recent death already (I originally put in ‘sad passing,’ decided he would have very gently shaken his head at the euphemism, and replaced it with the temporal and biological accuracy of  ‘recent death’).

However, I did meet him a couple of times, most memorably over a weekend in, I think, the late Eighties, or possibly the early Nineties, when he very kindly agreed to crit the work of the then members of the Edinburgh and East Coast Science Fiction, Fantasy, and Horror Writers’ Group: it’s a wonder the most unsnappy group name in the history of writers’ groups wasn’t enough to put him off.

It was January or February, and we’d booked some chalets near Kinross which were conveniently located near a pub. We had asked Iain if he’d come and look at our work, on the basis that we paid for the food, accommodation and alcohol (although, typically, he insisted on paying for the whole lot of us when we ate out in the pub on the last night).

I remember taking some of my fellow writers in my own car, the lucky ones disappearing up the M90 ahead of us in Iain’s: it was one of his BMWs, and it was reported that the sound system only worked when the speedometer ticked over past 90 mph. But then, it would do, wouldn’t it?

In the flesh, he was exactly as he came across in his interviews: humane, urbane, deeply witty, given to diverting digressions on everything from drug taking to The Pixies to faster than light travel. It turned out he was in age terms in between my brother and sister, and he had many of the same cultural reference points – Monty Python, for example (he worked as an extra on Holy Grail in the Doune Castle scenes).

Time moved on, and Iain’s star climbed higher and higher. He knew others in the group better than me, and as I wasn’t a regular sf convention goer, I missed japes like the time he managed to get himself under the carpet in one con hotel, and then proceeded to approach people for a drink from beneath it, like some huge, thirsty, Scottish mole.

I was on holiday in Spain back in April when I heard the awful news that he had terminal cancer. I sat on the balcony of our apartments in Cordoba, trying to take it in, and failing. Some time after I got back I wrote to him, telling him about all the ways he had inspired me, and given me pleasure with his writing.

I mentioned the look on the librarian’s face when, as a student in 1984, I requested The Wasp Factory. I mentioned a couple of other things, including the Kinross trip, and my reading, at an event where Iain was present, Sophie and the Sacred Fluids, a story inspired by Frank’s ritualistic use of his own bodily fluids in the Wasp Factory.

I won’t go into everything I said. It was a heartfelt letter, but I never expected for a single second that Iain would reply. Apart from the hope that he was spending whatever time was left to him enjoying life to the full with Adele and his friends and family (which I understand on good authority he pretty much did), I could see from his site that my letter was only one drop of an ocean of good wishes coming his way from all round the globe.

That outpouring has continued since his death on 9th June, last weekend. The critics may never agree on what, amongst his brilliantly eclectic output, is his best work: and some mainstream critics, of course, just don’t get the sf stuff. That’s their loss. For me, Iain Banks – with or without the M –  was always worth reading, although I’m ashamed to say I’ve not read all of it yet. Something I intend to rectify.

But what other writer showed Banks’s range: from the fearsomely intelligent sf of Use of Weapons, and Feersum Endjinn, to fantasy such as A Song of Stone, to family sagas like the Crow Road (brilliantly realised on t.v. by the BBC – you know, those much-maligned chaps?) and The Steep Approach to Garbadale; to the genre-busting The Bridge, his own favourite, to sly rock satire in Espedair Street? Not forgetting The Wasp Factory, of course, the novel that had the effect on that librarian’s facial expression of a thousand lemons sucked dry…

Hell, I even read Raw Spirit, his paean to malt whisky and the distilleries that produce it, and I rarely drink the stuff (I know, a sad admission from a Scotsman. But we Lowlanders traditionally imported huge quantities of red wine, so, hey.) That knowledge of his liking for a drop of the Highland crazy water has produced a rather pleasing meme in the Twittersphere since he left us (see, there I go again with those euphemisms) with people taking pictures of bookshelves of his books with a glass of whisky in front of them.

So, despite my preference for a good Rioja, I’ve done the same. In case you wondered, it’s a ten year old Balvenie, which in itself has an interesting provenance. It belonged to my friend and co-author of Legacy of the Sacred Chalice, C Bruce Hunter. I was ‘looking after’ the bottle for Bruce as he had bought more than he was able to take back with him to North Carolina at the time. Sadly, Bruce also died, in 2009, before I could get it back to him, but I’m sure he would think toasting Iain with it would be a good use of it (he did indicate, in his usual deadpan way, that he expected there to be ‘some evaporation’).

Iain Banks was one of a kind. We’re so used to saying that about people when they’ve gone, and it’s usually true, but in Iain we had a writer who could combine sublime technical skill (he wrote one of his novels as a two-stranded narrative with the strands travelling in opposite time directions from each other) with sublime concepts such as the Culture, his civilisation for most of his sf novels, with humour that ranged from the slyest of allusions to the most bitingly satirical.

He was also someone that didn’t hesitate to propound his own views on life, politics, and the state of the world in general, both within and outwith his books: he famously tore up his passport and sent it to Blair to protest against the invasion of Iraq, and wore his left-wing, Humanist, Scottish-independence-supporting heart on his sleeve in interviews and elsewhere. He instructed his agent to turn down any approaches for Israeli translations of his books on principle. Again, some people didn’t like that, at least when they thought it got in the way of a good story in one of his novels, but that was, I think, just a part of what he was.

For me, Banks was a truly popular writer. He had more than enough literary heft to be considered amongst the 50 greatest British writers since 1945 by the Times, in 2008. However, apart perhaps from Ian Rankin, I can’t think of a writer who I’ve had so many conversations about with friends and colleagues who have nothing at all to do with the literary scene, or the sf one for that matter either. He was read – and loved – by people who read books because they liked reading books, not because they were supposed to.

He did reply to my letter, by the way. Again, it feels wrong to retail publicly much of what he said, but he was characteristically self-effacing and positive. His last paragraph told me to keep on writing. So I shall.

To finish, here’s the poem I wrote shortly after I heard the news. It’s not really a tribute to him as such, but it does concern him, as it were. So long, Iain. I hope they get the Internet on the other side, so you can see all those tributes…

The Guadalquivir is boiling with mud

fingers of shade and light

in a shattered Moorish ceramic.

In Andalucia, the Castilian is pin-boned for ‘s:’

all the flesh would be stripped from misteriosa,

to a ghost walk.

There are more deadly things than ghosts,

Crab claws that catch at drifting skeins of cells

and another one of us is gone.

No more gold-leaf doors to hide behind,

hot scent of orange blossom rising from the stone.

Don’t give me Gypsy rosemary, for fortune

tastes stronger than a herb can mask.