The Worst Hotel In Madrid (Nearly) (Nearly In It, I Mean) 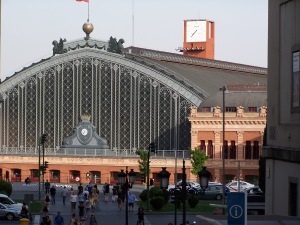 Atocha Railway Station, Madrid. We’re not going to stay in Madrid this trip – couldn’t find the right hotel in the right place at the right price – but as we head off to Segovia and Caceres instead, I thought I’d start with this piece about our usual port of entry to Spain, and where not to stay.

If the path to hell is paved with good intentions, the path to hell in a hotel is pretty close to it. Maybe like one of those cycleway/pedestrian routes that are becoming quite the thing these days: they run alongside each other for most of the way, then at some key point they diverge for one reason or another, and you end up, not in hell as such, but in a hotel that bears a distinct resemblance to one of the entry-level circles of the Inferno you might have read about if you’re a Dante fan.

What on earth am I talking about? Okay, so here goes. By a couple of years ago, we’d stayed in a lot of hotels, hostals, and apartments in Madrid. We knew the options, but on this particular occasion, we needed a one-night stopover before our flight home. And the train from up north didn’t get in till mid-afternoon.

You know how it is. You work hard all year, so you want to wring the last drop of leisure and pleasure out of your holiday. You’re determined that you’re not going to spend the last 24 hours packing, repacking, sitting waiting for the train/bus/taxi to the airport, then arriving there early, and wandering round the duty free (another infernal circle Dante didn’t get around to) wishing you could speed up the clock and just get on the damn plane and clear customs and the baggage carousel (speaking again of infernal circles) and get home and get a brew on.

I know, right? So, given the very limited time we’d have, we came up with a plan.

‘How about,’ the Redoubtable Mrs F said, ‘an airport hotel with a pool? Then we could just relax and enjoy ourselves, and be right at the hotel in the morning.’

And so it began. It seemed like a straightforward search on hotelsdotwhatever – ‘Madrid/near to airport’ with an added filter for swimming pools. Simples.

It was near to the airport, it said. It had a swimming pool. It was not outrageously expensive. We were to discover that two out of these three statements were, at the least, factually correct. As Meatloaf sang, two out of three ain’t bad, but then he was singing it in the pre-internet age, so it just doesn’t count. And he was also singing about love and desire rather than hotel accommodation, if I remember rightly.

Suspicious of the ‘near to the airport,’ assertion, I googled it on the map function. It seemed to be in the middle of nowhere; but then, so too is the airport, and scrolling between the two gave me no concept of distance. I was like an ant, sucked suddenly into the upper atmosphere, peering down at distant anthills and the paths between them. I should probably learn how to use the map function better.

‘It looks like it might be near the airport I said, blind optimism triumphing over inner belief.

As it turned out, it was as far from the airport as it was from Madrid, which in turn was about the same distance away from the airport. In other words, the hotel, the airport and Madrid all formed an isosceles triangle on the huge central plain that, apart from the capital city itself, houses little in the way of human habitation. We were unaware of the full extent of my research failings until, taking a taxi from the station, we found ourselves on a €25 journey – about the same cost as if we’d gone to the airport from a hotel in the centre of the city. 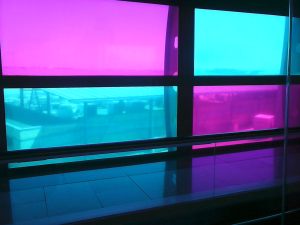 ‘Well,’ I said, still seeing the positive side (it had been a great holiday, after all). ‘At least we’re close to the airport now, for the trip in the morning.’

As explained above, we weren’t, but we didn’t know that yet. The hotel, once we had turned off the last featureless motorway intersection, was located in what appeared to be an industrial estate, although the looming shapes of other hotels suggested the main industry was parting tourists from their money.

It’s frankly an understatement to say the exterior looked unpromising: perhaps the architect was going for some ironic post-structuralist Eastern Bloc in-joke, but you probably had to be another architect or a former KGB member to be in on it. Inside, though, things cheered up considerably: there was a lot of modern wood panelling, and groovy lamps, and sculpture type things, littering the reception area. Things got even better when we got to our room, which was actually a suite of rooms, with cool furniture and the same modernistic vibe. Nice.

Daughter and Heiress was hungry. ‘No problem,’ I said confidently. ‘The restaurant opens at four, and it’s already half four.’

The restaurant, it transpired, was reached along the inside wall of the massive internal quadrangle the hotel’s foursquare construction had left. Kind of like a neo-brutalist hommage to the traditional Andalucian internal patio, I mused.

Before we went to eat, we crossed the quadrangle to check out the swimming pool. We would have a snack, we thought, and then get our cossies from the room and go for a swim before dinner.

The pool was located in its own building, which echoed the same Cold War ethic our architect had striven so hard for. It was a full 25 metres of beautiful blue, and the whole place was empty, apart from a very bored-looking lifeguard in tight-fitting shorts.

I was on the way out of the country, so I gave up on the Spanish charm offensive. It didn’t feel like it was working anyway. ‘Do we need to bring the towels from the room?’

‘Yes, and you need a bathing cap.’

‘Yes. You can buy one from the shop.’

‘Oh,’ I said. I looked around for some sign of a shop.

‘It’s out there on the left,’ he added, not unhelpfully.

He looked at me as if I wasn’t grasping things quite as firmly as he thought I should. ‘The changing rooms are out there too.’

Having located the spartan, concrete, changing rooms and, in a separate concrete building, the shop, we decided to give the restaurant a go. Which is where things really started to get weird.

By this time, it was about a quarter to five. I rattled the door of the restaurant, but it seemed stuck. After a pause, a pleasant-faced waitress appeared and unlocked the door.

‘We’d like something to eat,’ I said, trying the Spanish tack again. ‘Is the restaurant open? It says it’s open at four.’

‘Does it?’ This seemed like new information to her. She wandered off, and we wandered in, to find a vast, empty restaurant, about the size of a football pitch. At one end, a cook hovered near an open serving hatch. At the other, a man sat talking animatedly into a mobile phone. The waitress went to him, pointed to us, and he nodded. She drifted back towards us. ‘Where would you like to sit?’ she asked, pleasantly.

We chose a table roughly on the half way line between the underemployed cook and the man barking into his mobile, who seemed to be in some sort of supervisory role.

The waitress, with whom I felt we now had a reasonable rapport, after all we’d been through together, produced menus with pictures on them and text in Spanglish. Daughter and Heiress ordered nachos with chicken and cheese; I ordered something or other.

In due course, D & H’s nachos arrived. I called the waitress back, smiling to indicate I understood this really wasn’t a big deal.

Phrases you won’t find in the phrasebook, lesson 1: ‘Los nachos con pollo y queso? No hay pollo ni queso.‘ ‘The nachos with chicken and cheese? There isn’t any chicken. Or cheese.’

The waitress took the lonesome nachos back to the cook. Minutes passed. There was a debate between the cook and the waitress. I found myself checking the menu, to be sure we hadn’t hallucinated the promise of chicken and cheese. The manager at the far end carried on with his phone conversation.

Eventually, the nachos reappeared, with chicken, but without cheese. Daughter and Heiress, sensing this was as good as it was going to get, ate them, another part of her childhood faith in her father to fix everything eroded. We paid and left, and silence, save for the manager’s barking, descended on the place again, along with a sense of peace restored.

Later, after our swim (some fellow residents, a youngish family, also appeared, and splashed about half-heartedly under the thousand yard stare of the lifeguard) we went for dinner and things, if possible, got even weirder: in a by now half-filled restaurant, you had to queue at the door, decide then and there what you wanted to eat and drink, and then pay for it, before you were shown to your table. It was like an engineer accustomed to developing air conditioning systems had been asked to design the most logistically efficient way of combining customers with their food and drink.

In the morning, we took another €25 taxi ride to the airport, in an emotional state best described as nonplussed. It was the weirdest hotel I’ve ever stayed in, and bear in mind this is from someone whose Seventies childhood involved being taken on holiday to Highland hotels and guest houses so bizarre it looked like they were treating Fawlty Towers as a training video.

Fortunately, this is very much the exception in relation to Madrid’s accommodation offer. In future instalments, I’ll tell you where you really want to stay.

Nothing to see below here. Except adverts for hotels, probably, if the cyberbots are doing their job.