The Ballingouls of Balbirnie: a Father’s Day story

We’ve been walking round Balbirnie Estate quite a bit recently, for a number of reasons. Firstly, we’ve never found a proper way to commemorate my Mum and Dad in the town they spent so much of their life in (Mum has a bench dedicated to her and her parents in her home town of Huntly, put up by Dad).

During lockdown, of course, it’s a lovely place to walk round in good weather for no other reason than to enjoy it: especially in April and May, when the rhododendrons and azaleas are in full bloom. It’s always been a special place to all of us; a place to walk and experience peace and quiet. Alison’s Dad was a big fan, too.

So a brief history: the Balfour family acquired the Balbirnie estate from a family called, er, Balbirnie, in 1640. They were to own it right up until 1969, when they sold it to Glenrothes Development Corporation (GDC). Balbirnie House, now a classy hotel, changed shape a few times over the centuries, finally being remodelled in the classical style in 1815. There’s also a set of stables up the hill from the main house, which GDC let out as a craft centre (although I see some of it is now being used for AirBnB).

However, unless you’re kilted up for a wedding, it’s not the house you come to see, it’s the policies. They were laid out by Robert Robinson, a contemporary and colleague of the more famous ‘Capability’ Brown, in the 1770s, and tinkered with a bit over the next century or so, although the basic layout seems to have stayed the same. Topography-wise, the house sits amongst typical rolling Fife countryside: some of the original designed landscape has been lost when the Corporation built a golf course on some of it, although, to be fair, a golf course isn’t a bad way to preserve the central core.

As the Laird looked out from the front windows of the big house, however, he would see the most striking feature of

the land; a small hill, rising up more or less in the middle of the policies: the pic on the right shows the immediate view, where some of the best specimens are planted, of course, for that reason.

But it’s when you walk past the house, with its extended car parks for the wedding guests, and hang a right at the golf clubhouse, that you enter the deeply planted area in and around that hillock, and the magic happens.

General Robert Balfour, the Laird in the first half of the 19th century, had a brother George, who had a pal, one Joseph Hooker. Those of you who know their garden plants may recognise the name from various species that have hookeri, or hookerianum appended to them: because Hooker was one of the pre-eminent plant hunters of the age. Through him, and the Balfours’ energy, a massive collection of over 200 rhododendron species, not to mention a similar amount of exotic tree species, found their way to Balbirnie, where many of them are still growing to this day. 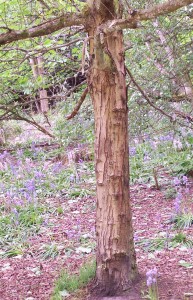 (At this point, a note for our troubled times: I have no idea if the Balfours traded in slaves. They did own collieries, and miners in those days – the local Fifers – endured a form of serfdom that was slavery in all but name. I similarly have no idea whether they were good to their serfs, or absolute bastards. The current Robert William Balfour, who is Lord Lieutenant of Fife (something to do with being the Queen’s representative in these parts) is, as I understand it, absolutely lovely.)

Anyhoo, one of the reasons we know so much about the plants and their provenance is that the same family, the Ballingouls, were the estate factors for the Balfours from 1771 to 1916. ‘Estate factor’ is a position that still exists, and basically equates to the business manager for a landowner: in other words, the guy that runs the various interests arising from landownership – which in the case of the Balbirnie Estate would include several farms in the area, as well as the collieries.

In coming across a reference to the Ballingouls, I had thought I’d stumbled on an obscure reference that no one knew about. However, type the more modern spelling of the name ‘Ballingall’ into the search, and you’ll find that a whole book has been dedicated to them. There were three generations of father and son, who served as estate factor, the first of them for an incredible 72 years! I’ll leave you to read all about them in their ancestor’s book, although I don’t fancy paying £48.26 for it on Amazon, so I’ll see if I can get access to a cheaper version. If so, I’ll update this to let you know. Markinch Heritage Society have a piece by the same author on the last of the Ballingalls. [Update: see below]

Anyhoo. If you’re wanting to see the best of that core of the estate where the woodland garden is, don’t hang a

right at the golf clubhouse, on reflection: I want to take you the other way round. Take the spur off the main road into the estate, toward the former stables, then right again just before you reach them. That’ll take you past the walled garden, where some exceedingly lucky people rent allotments: but from there on in, the light begins to dapple, the birdsong pushes out the sounds of traffic and other human activity, and, aside from others appreciating the same thing, you’re alone in the woodland, under its benediction of scented oxygen.

The paths, incidentally, correspond to the 19th-century plans of this part of the Estate, as you might well expect, because the trees and rhododendrons – most of them at least – also date from then. And it is, inevitably, the rhoddies, that are the stars of the show, especially in spring and early summer. Take a left at the crossroads – if you’re feeling energetic, you could go left before then, and follow the winding tracks up the hill, where the planting clings to the slopes like a miniature Himalayan forest – and you’ll reach the final part of the path before you rejoin the madding crowd of humanity in the form of golfers.

You can’t hear them yet, though. There’s just you, if you’re lucky, and the

birdsong. Isn’t it gorgeous? It’s just one of those special places where nature takes over, and a magic descends that is not of human origin. I found myself thinking of an old Scots poem, about a guy that gets carried off by the Queen of Fairyland (cultural note: Scottish fairies are badass, and being carried off by their Queen is not necessarily a Good Thing):

“Light down, light down, now, True Thomas,
And lean your head upon my knee; 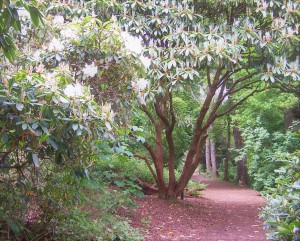 Abide and rest a little space,
And I will shew you ferlies three.”

“O see ye not that narrow road,
So thick beset with thorns and briers?
That is the path of righteousness,
Tho after it but few enquires.

“And see not ye that braid

braid road,
That lies across that lily leven?
That is the path to wickedness,
Tho some call it the road to heaven.

“And see not ye that bonny road,
That winds about the fernie brae?
That is the road to fair Elfland,
Where thou and I this night maun gae.”

I started off talking about a memorial for my Mum and Dad, and I’m going to finish, given that it’s Father’s Day, talking about Dad, who taught me everything I had to know about being a father – even if I had to relearn some of the lessons for myself. Before Balbirnie House became a hotel, it was for a brief time the GDC offices, and he worked there just before he retired.

However, the real connection with him is that we know he loved the place, and would have done everything he could to preserve as much of the original park – and that magic I’ve been wittering on about.  We’re thinking of putting a bench somewhere in the park as the memorial, rather than planting a tree: the obvious place is out on the main drive, perhaps with a view of the golf course and the Big Hoose. Another spot, though, would be a little up the path from that magnificent arch formed by a 170-year old Rhododenron Calophytum, to drink in the peace and quiet of the woodland garden, created by those fathers and sons from the Balfour and Ballingall families.

I’d like to dedicate this piece to everyone who, like me and Alison, no longer have their Dads with them, at least in body: whether in spirit is, as they say, an ecumenical matter. I know what I think.

P.S. You can read more about the formal status of Balbirnie as a Designated Garden and Designed Landscape here. Full text of the Ballad of Thomas the Rhymer here.

P.P.S. Markinch Heritage Society have been in touch – the cheaper option in terms of reading about the Ballingalls is to go to their online library, where the three Ballingalls are separately listed, and also get a mention in the Kirkforthar Ditches piece on there. Also recommended is their Local Walks page, which lists walks around Balbirnie and the Markinch area generally.