To the Scott’s of Stow catalogue, then, since we’re not going out for the forseeable future, and it’s come to us.

I sometimes think, if you want elegant-yet-reasonably-priced evidence that we’re in the death spasms of late-period Western-style capitalism, you’ll find it in the Scott’s of Stow catalogue. It’s the perfect example of selling you the dream (look at the actual shop! Don’t you just bet that, round the corner, there’s a pub with a jolly, ruddy-cheeked landlord ready to sell you a pint of the finest English ale you’ve ever tasted, not to mention a butcher, baker, and candlestick maker, I shouldn’t wonder) whilst, in reality, selling you stuff you didn’t realise you’d never need.

Now, I should say, for legal reasons if no other, that Scott’s does have stuff that we might actually buy. I’m quite drawn to the stain-resistant, ‘tartan inspired’ rugs as a cheap way of recarpeting my study/music room; we may well shell for the rug grippers too, because our existing ones have bigger migration patterns than your average West African wildebeest. However, in a desperate attempt at comic effect, I’m going to focus here on some of the things in the catalogue that, frankly, I couldn’t imagine ever giving house room to, no matter how much slow-release lysergic acid they sneak into me with the coronavirus jab (only kidding! I am very much pro-vax! Don’t write in!!!)

Of course, one issue with all of this is the one of age: I don’t know when we last ordered something from these guys to mean we get the catalogue through the post, but I must have been going through some sort of young fogey stage, because it’s only now that I feel I might, technically, be entering the right demographic.

A case in point is the manual typewriter on page 3 of the catalogue. ‘No Batteries, No Mains Cables, No Software Needed’ the header shouts, and, indeed, if you yearn for, as the text below says, ‘the nostalgic sounds of the clickety-clack keys and the carriage return ‘bing,” then this is the very item for you.

Now, I am just old enough to remember back before computers were really a thing. When I was a first-year trainee lawyer, the reasonably up to the minute country firm I worked for still did most of their documents on typewriter: the office rang to those clickety-clack sounds and, indeed, bings. However, if you were a very good little first-year trainee, and the partner liked you, sometimes you got to take your fledgling document up to the Word Processing Room, a place not unlike the villain’s lair in the early Bond films, where two lovely secretaries would feed your legalese into the massive machines that took up the rest of the room. I mean, there were blinking lights and white cabinets taller than me and everything! No Persian cat, though. That was in the senior partner’s office.

I won’t be taking a position in the manual typewriter market, I’m afraid, not even if they throw in a gallon of Tippex for all the mistakes I make while writing, as the catalogue suggests, either the parish council minutes or my memoirs. 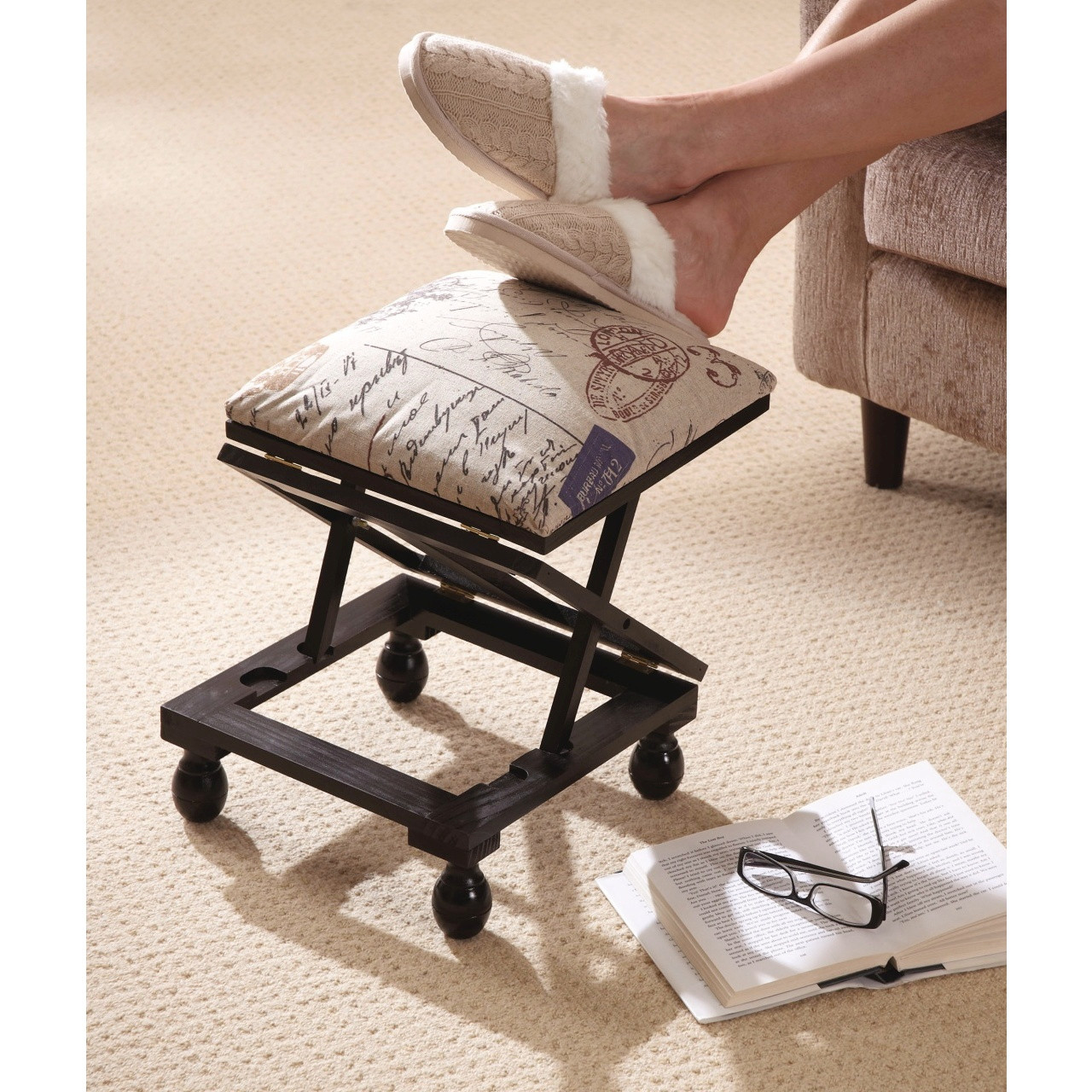 That’s not to suggest that Scott’s of Stow stop at the door to your home office, however. Oh no. They have stuff to clutter up every room in the house, if you feel so inclined – take, for example, this rather natty 3-position footstool: ‘crafted from MDF with sold wood egg-shaped screw-in feet,’ it’s available in mahogany or white. Knackered after a weary day pounding the mean streets of Stow-in-the-Wold, looking for a pub where the jolly, ruddy-cheeked, landlord hasn’t been forced to close because of the restrictions? Not sure what position your feet should be in to maximise your recovery? Well, hell, buddy, there are three options right here (19, 30 or 38.5 cm)!

But wait. I wouldn’t want you to get the impression that Scott’s of Stow is some Luddite enclave where typewriters and  footrests are the only thing on offer. Take, for example, this magic Cera Titanware Defrosting Tray (£19.95). Too busy working out footrest positions to remember to take tonight’s tea out of the freezer? Fear not, pilgrim! This ‘superconductive tray,’ made by these clever folks, ‘simply uses the natural heat energy in the air to accelarate the defrosting process.’ Frozen food can thaw ‘up to’ ten times faster!

Told you it was magic!

In a similar vein, the Reviber Super Slim Vibration Plate must surely also use some form of special powers to achieve its effect. Been defrosting too many steaks lately, and putting on the paunch? Fear not! Like this lady, you can simply vibrate those lockdown pounds away (stop sniggering at the back there!)

Apparently designed to help Russian cosmonauts prepare their bodies for the adverse effects of weightlessness in space, so don’t go saying that nothing good ever came outta Russia, buddy. There are 99 intensity levels, all in one super-slim thingie that you can store under a bed or in a cupboard. You can probably even use it during a Zoom work meeting (note, this is my own suggestion: no liability accepted for actually following through with it).

Inevitably, the dreaded ‘Rona makes its presence felt. How else to explain, for example, the price reduction on the fabric plate warmer, half price at £24.95? As the blurb says: ‘Why spoil delicious hot food by serving it on cold plates? When oven space is at a premium, switch on this space-saving electric plate warmer. Heating up in minutes, it fits up to ten full-sized dinner plates. Advanced elements concentrate on the base of each plate, leaving outer edges safe to handle and fabric cool to touch.’

Sadly, as no -one is allowed to go into anyone else’s house for a coffee, let alone a full-sized dinner party for ten, I guess this little item is not going to shift units at its original price of £49.95 right now. However, if you’re a glass (or dinner plate) half-full kind of person, this could be the investment for you while you sit, arse on the Reviber Super Slim Vibration Plate, feet in position 2 on the 3-position footstool, waiting for your Findus Pancakes for One to defrost on the Cera Titanware Defrosting Tray. We all have to have a dream.

However, while you dream, remember that reality is currently a risky, virus-laden kind of a place, and you never know what might have crept in on the Damart underwear catalogue, or even your Tesco home delivery. Fear not though – Scott’s of Stow have the answer: Sterilise and Deodorise Everything with 100% Natural Electrolysed Water! Yes!!! And because it uses only water, salt and electrolysation you can use it on ‘surfaces, upholstery, food packaging…’ your spouse too, I’d have thought. The spray mechanism apparently reaches ‘every nook and cranny’ (I’ve warned you at the back already…)

You could, of course, achieve the same effect by recreating the electrolysis experiment of your early secondary school with a couple of batteries, two electrodes, and the selfsame salt and water, to separate the chlorine from the sodium. But hell, who’s got the time for that? There are steaks to defrost, parish council minutes and memoirs to type, and dinner parties to dream of!

That’s probably enough nonsense for now, and in fact for some time to come. No one really asked me to set a schedule of a blog a week, and while I’ve enjoyed the challenge, I’m really wanting to concentrate a bit more on all the unreleased music I have sitting in various forms of undress about the place. So these Sunday Supplements may become a bit more occasional.

Speaking of music, I’ve been doing a clearout of my Soundcloud acccount recently, in anticipation of putting more new stuff up soon once they’re fully dressed (I have three albums’ worth of material to tie down). I was fair chuffed with myself for the electrified version of one of my songs, ‘Daughters and Sons,’ and shared it privately with my Inner Circle mailing list: until someone pointed out it was – lyrics aside – very like George Harrison’s tune, ‘Isn’t It A Pity.’ Damn those moptops! So, free to air, here’s the instrumental bit at the end, while I work on a new tune for those lyrics.

At least Scott’s of Stow have some original ideas….