My Culture Fix – from a Philistine

There are many reasons to love Bruce Springsteen, but I discovered another one when I saw his Broadway show on Netflix last year (or was it the year before? Kind of a blur, 2020/21, no?). In his introduction, he describes himself as a fraud, having written virtually all of his songs about things he’s never done himself, like working in a factory, or going drag racing, or almost any common theme you get in a Springsteen song. The truth, he tells us wryly, is he’s been an itinerant musician almost all of his life – indeed, since he hightailed it out of his home town to become one.

Well, I may have nothing on the Boss talent-wise, but I share one thing with him, for I too, am a fraud. An imposter. A chimera, indeed. I know many people – even those who have read this blog – consider me a cultured type, always ready with a Spanish buena palabra, a quote from Sylvia Plath, a lyric from the late, great Leonard Cohen.

The truth, dear friends, is I’m closer to being a Philistine than any sort of culture vulture (just as an aside, what book is it in the Bible that casts the Philistines as Sun newspaper-reading knuckle-draggers that like nothing more than playing Michael Buble’s Greatest Hits at full volume late into the night? I mean, I know the Pharisees were a bunch of bastards, but the Philistines? One of the books I have actually read is the Bible – as a kid, for no better reason than I was brought up in a non-religious family and was therefore not expected to – and I don’t remember that bit. Was it early on, when the Israelites were doing a lot of smiting? Maybe it was in one of Paul’s letters. I mean, he does do a good quote or two, but he bangs on a bit. I may have missed the bit about the Philistines).

But I digress. A bit. Let me lay it out for you. I hate opera. With a passion. Classical music, meh. Sometimes, but not for long, and only all the really tuneful stuff like Bach, Beethoven or Mozart. Jazz? Forget it. Even blues gets on my tits after the third 12-bar in a row.

Musicals, for me, are right down there in Dante’s seventh circle of hell, especially the collected works of Andrew Lloyd Webber. Theatre doesn’t do it for me – in fact, most art forms that involve suspension of disbelief don’t. As for visual art, well, I know what I like, but I couldn’t tell you why.

Even in books and music, two things I have actually created myself, my knowledge is patchy, at best. It was almost literally a toss of the coin for me as to whether I did law or Eng. Lit. at Uni, but after it came down tails and set me to a life of pettifogging, I increasingly turned away from the sort of books you’re meant to read – especially modern novels. In the music sphere, I’ve lost count of the number of artists I’ve had to look vague and nod about when more clued-up muso friends start banging on about them. Bit like Paul, with all those letters to the Ephesians.

So it’s probably as well that I’m never going to feature in the weekly Times of London column, My Culture Fix, in which some bozo ‘lets us into’ their ‘cultural life.’ Like they’re doing you some sort of massive favour. I mean, imagine your typical Times reader opening their Saturday Review and seeing my two-generations-from-peasantry physog there, and reading answers to the standard questions as crass as these below. They’d choke on their smashed avocado, poor things.

My favourite author or book

Iain Banks. A thoroughly wonderful human being and a genius writer, not often a combination you get in a single package. I gave his enfant terrible of an early novel, The Wasp Factory, with its (spoiler alert) gender-bending hero Frank and their dog-burning brother to my daughter to read when she was 12. Probably should’ve waited a couple of years, being honest. She’ll be fine with all that therapy.

My absolute favourite of all his novels though has to be The Bridge, which he described

as the one that grew up properly and went to University. An absolutely stunning narrative about a man in a coma living in a fantasy world in the Forth Bridge. Irvine Welsh stole the plot for Marabou Stork Nightmares, many years later, but predictably it wasn’t a patch on the original.

I always have a couple of books on the go. One these days will be a Jack Reacher novel; I am, somewhat doggedly, trying to catch up on all these Eng. Lit classics of yore, so I have Virginia Woolf’s To the Lighthouse and a book of Raymond Carver’s short stories by the bedside. Haven’t opened either of them yet, mind. Lee Child is just so good.

The book I wish I had written

Ulysses, by James Joyce. I mean, it still sells well thanks to all those Eng. Lit. reading lists, and he could’ve put his shopping lists in the last third of it and nobody would notice. No one. Ever. Reads it through to the end.

The book I couldn’t finish

Too many to mention. Life’s too short and all that. Most recently, I tried to reread Huxley’s Brave New World, which I read when I was much younger and really enjoyed. Now, not so much. Maybe I’ve become more Philistiney as I’ve got older.

I’d have died of shame long ago if I bothered to feel ashamed about that.

Total Recall – the whole of the human condition, right there, in Arnold Schwarzenegger’s huge hams of hands. Plus Sharon Stone. The original Terminator. Silence of the Lambs. The Exorcist. Jaws. See a pattern emerging?

From a very short list, Macbeth. That said, I’ve seen some really shit versions of the Scottish Play over the decades. The best by a mile was in the ruined bit of Falkland Palace, on a rare dry Scottish summer night. Properly spooky.

The box set that I’m hooked on

None. But I can recommend Casa de Papel (Money Heist) on Netflix. We’ve worked our way through three series so far.

I guess I find most tv disposable, but we’ve generally got one or two or three dramas on the go, which generally feature some sort of detective or other investigator with a host of personal problems and a seemingly insoluble case. Plus, for light relief, The Repair Shop, and as many music docs I can sneak under the radar. When it’s not got wall to wall Andre Rieu on, Sky Arts has good stuff about the making of classic albums. Although I’ve probably seen the one about Rumours enough times.

My favourite piece of music 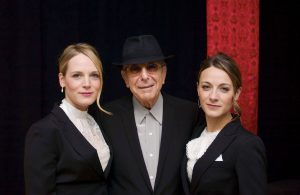 The lyric I wish I’d written

Either this one from Dylan:

‘Now the beach is deserted except for some kelp
And a piece of an old ship that lies on the shore.
You always responded when I needed your help
You gave me a map and a key to your door.’

or this from Cohen:

‘There is a crack, a crack, in everything

That’s how the light gets in….’

Okay, okay, so that’s not Dylan’s best. Probably his line from ‘Visions of Johanna’: ‘the harmonicas play the skeleton keys and the rain.’ No idea what it exactly means, but you intuitively know anyway.

The poem or song that saved me

It would be a song, but it’s a long time since I needed saved – at least in terms of romantic love. In terms of bereavement, I guess a couple of Cohen’s songs have given the greatest comfort.

Although AC/DC’s album Back in Black also has its place.

The instrument I play

Guitar. Harmonica (blame Dylan – he can take it). One-handed keyboard.

The instrument I wish I’d learned

Guitar, properly. Piano, so I could play keyboard with both hands. I blame Miss Guthrie, may she rest in peace in Dante’s seventh circle with Lloyd Webber on a constant loop. She was the old dragon of a piano teacher I got sent to at a tender age. When her dog wasn’t farting it was chewing your ankles. Maybe it was a reincarnated music critic.

And saxophone, of course. Who doesn’t?

The music that cheers me up

Music is meant to cheer you up? Don’t tell the shoe gazers! Nick Cave’s ‘I call upon the Author.’

If I could own one painting it would be…

Dali’s Christ of St John of the Cross. You’d need a hell of a hallway to hang it in though. 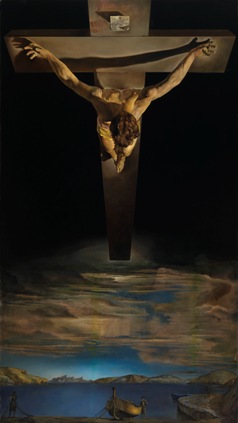 The place I feel happiest

I feel happy most of the time, most places, but generally somewhere in south Edinburgh surrounded by loved ones and/or friends. Or deep in a rehearsal room with a band, hearing a new song fly for the first time.

Or a cafe in deepest tourist-free Spain.

At which point you’re meant to confess to liking Coronation Street, or something similarly lowbrow. As the above will have shown you, I’m so consistently lowbrow I have no shame.

I wish they’d bring Gladiators back on the telly.

I’m having a fantasy dinner party. I’ll invite these artists and authors…

Muriel Spark. Iain Banks. Bob Dylan. Leonard Cohen (might have to separate these two). Robert Louis Stevenson. Marilyn Monroe. Sylvia Plath. I think that would lead to some interesting conversation. And my Mum and Dad, who were both lesser known artists in their own way.

And I’ll put on this music…

It would have to be back to back Dylan and Cohen albums. If the conversation stalled I could ask them what they were thinking when they wrote such and such a line.

The film I’m looking forward to

No idea. I do like films, but I’m not organised enough to look forward to them.

I wasted an evening listening to….

I can’t say I’ve ever wasted an evening as such. I’ve wasted a lot of time recently listening to the news describing in shocked tones how utterly unscrupulous the current Prime Minister is.

The play I walked out of

Never walked out of a play. Too repressed and Scottish. Not even the shit Macbeths (now there’s a band name).

Every writer, poet and musician who I’m friendly with. Often by themselves. It’s a Scottish thing. We’d be self-deprecating if we weren’t so rubbish at it.