Up Anti-Down: a lesson in physics and music

When Graham Crawford, my Isaac Brutal bandmate and buddy, suggested collaborating on some synth-based music, I was intrigued. When he told me that the piece could be explained by means of a Feynman diagram (see pic) I knew I was in above my head!

It was a great chance to try to move out of my guitar-playing comfort zone (although the Sniper Edition Tele was used in the making of Up Anti-Down) and really experiment with different textures. Also, for me, doing an instrumental, freed of the self-imposed burden of writing any sort of meaningful lyric, was really liberating.

But I’ll leave the explanations to Graham! He writes: 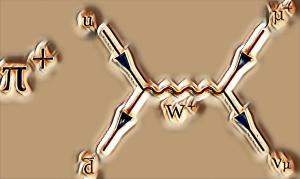 The creation of a piece of experimental music

The initial idea for this project came from my day job as a physics teacher.  One of my pupils did an experiment to measure muons using a detector borrowed from the cern@school project.  The detection of ground level muons was the first experimental evidence confirming Einstein’s theory of special relativity.

I started to plan a piece of music that captured the creation of muons from the beta decay of pions.   The music had to be experimental.  I wanted to explore the ways in which sound could be made and push the technologies I had available to me.  Science is a collaboration so sharing half of the piece with Andrew allowed me to not have to understand how the whole piece is created but we were working to achieve a common goal.

Pion was written quite quickly so I could let Andrew have a feel for how the piece would sound.  I created it by playing my acoustic guitar through an instrument to midi converter which was plugged into an old iPad running GarageBand. Synth sounds were layered to give a space invading, early moog synthesiser feel.

The title of the piece comes from the quarks that make up a pion.

The music needed to capture the relationship between the time measured by different observers.  The muon lives its life fast.  Even travelling at close to the speed of light it should not be able to make it to ground level from its starting point in the ionosphere. The muon measures its own time and distances different to us and sees our clocks running slow.  This allows it to reach the ground before decaying.

I used an old Raspberry Pi computer and the programming language Sonic Pi which allows live coding of music. This gave me the chance to play with time during the recording. It also gave me access to a library of sounds which could be manipulated in new ways.  The muon dances a jig in its version of time compared to our slow movements.  The jig was recorded on a mobile phone with my daughter, Amy playing the violin and I added guitar, bass and mandolin.  Extra synth parts were added again written on the phone.  Merging the jig and the computed sounds together was tricky and again involved adjusting the time.

I am very pleased with the end result.  Physics, collaborative working and experimental music merged into one cohesive piece of work.  Job done.