Harky, the Husky, and the Curious Incident of the Dog in the Night time

It’s not often a story about me gets into a book that’s not one of my own. Okay, so once now. There I was on 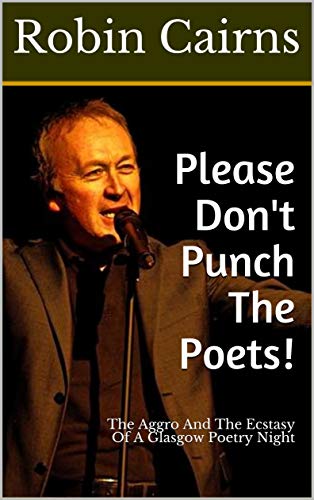 Facebook the other day, minding my own business, when Robin Cairns hove to on my recipe page, Peasant Stew, promoting his book on it. Here’s what he said:

Please Don’t Punch The Poets – the history of Last Monday at Rio and the last twenty years in Scottish poetry – is now available on Amazon kindle.

It’s the candid inside story of a poetry night in Glasgow. For ten years Robin Cairns ran “Last Monday at Rio” in Partick’s Rio Cafe. He recounts the evenings of sparky, heartfelt spoken word as all kinds of poets took to the open mic in a Glasgow pub – the brilliant, the belligerent, the barmy and the bad! Nasty poets, nice poets and even on one occasion a naked poet! Cairns recalls stories of performing poetry in prisons, bowling clubs, shopping centres and rock festivals – and how he himself came close to being punched during a performance in Kilmarnock. He also lifts the lid on the scandalous cheating which takes place at Poetry Slam competitions – and he names names! It’s a riotous romp of a read which opens the skulduggery and the scheming of the spoken word scene to a gasping, incredulous world. As the celebrated performance poet David Lee Morgan said, “Good grief, Robin, have you decided you don’t need friends any more?”

This is the link to click on if you’d like to purchase it. It’s £3.30. However, if you only want to read the bits which mention yourself just ask and I’ll see what I can do.

Now, Robin had contacted me a few weeks before, asking if I had any memories of performing at his Last Monday at Rio night, and I’d never got around to replying. When I apologised for this, he told me that, despite, my mora and taciturnity, as we Scots lawyers say, there was a story about me and a husky in Aberdeen in the book!

My spoken word career generated quite a few stories of its own, as well as bringing me into contact with one or two memorable characters. Robin, himself an accomplished writer and performer, certainly fits that mould. I did a solo ‘guest slot’ at his Last Monday at Rio night; he also, for reasons he’d have to explain, roped me into being a judge in the Scottish Slam Poetry Championships one year, despite me being almost the opposite of a ‘slam poet’ in terms of my own performance style. Bumbling being a kinder expression for it at times.

The Curious Incident of the Husky in the Night Time happened at, or more accurately, just before, another gig I got, this time up in Aberdeen, near the end of my soi-disant spoken word career. If you want to know what happened with the dog, buy Robin’s book, but what I remember most about the night – apart from the sense that I went down well with the locals, and it was an enjoyable trip – was the crucial role my mate Harky played in keeping me awake in the two-hour drive home at whatever time it was. But then, the lad has form for propping me up at crucial moments.

Harky it was who ‘sourced’ – and I use that word advisedly – a PA system for a Robert Louis Stevenson-themed show I did in Edinburgh’s White Horse pub in November 2014. The system belonged to the Kirkcaldy YMCA, and I remember us gingerly approaching the place one night with a view to semi-demi-unofficially borrowing it. Harky had connections with the guys there, and they were cool with it, but on the night in question the guy who was on the desk wasn’t, shall we say, one of the ones Harky was best connected with. I remember acting as nonchalant as one can act when lugging a fucking massive PA system past a guy who has no idea why it’s being lugged anywhere!

At the gig itself, Harky it was who did the sound engineering,  and did the live recording on the EP I’m coming to in a minute, in return for nothing more than a pint. Harky it was, too, who produced all the really interesting sounds to accompany my poem, ‘Leaving Granada,’ which is another of the tracks on the EP. I wrote it – or what turned into it – in Spain in April 2014, grieving my Dad, who’d died in January that year. When he went, virtually all my words seemed to go with him, and it was only when the music came back that things started to feel anything like better. Harky helped with that more than he knows.

And it was Harky who, along with my other mate Gav, inducted me into the mysteries of sound recording and engineering, lighting a musical fire under me that burns ever brighter. I miss these guys in lockdown.

That gig in November 2014 coincided with my sister’s 60th, a great family event which she celebrated in the Old Observatory on Calton Hill, as you do if you’ve as much style as my sister.  Another pal, Kenny Mackay, came to the gig and on the basis of a text brought his guitar and amp with him, as you do, and improvised a killer guitar solo at the end of my spoken word piece, ‘Hyde’s Last Words.’ It’s my favourite live recording of my stuff still.

Which must be the longest ever preamble to a sales pitch! My recent bout of temporary deafness produced what might be called a prose poem – the first for a long time. As soon as my hearing came back I stuck some music under it, and got Mark and Emma to speak/sing it rather than me, just to make it more interesting. They did such a bang up job it got me thinking I could repackage, and remaster, the spoken word pieces from my first album with it, call it an EP, and flog it in support of Fife Women’s Aid.

So here it is: click here to get 5 tracks plus two bonus ones, and a pdf of lyrics plus photos, if you buy the lot. Can’t say fairer than that!

Plus if you buy it today, Friday 3rd July Pacific Time (or from 8 a.m. GMT) Bandcamp are waiving their royalties share, so even more goes to the Fife women in need of aid.

Take that, huskies of Aberdeen!