The Loneliness of the Bleeding Heart Liberal Supermarket Shopper

Now that Bob Dylan has finally finished sheltering here with us in Glenrothes and taken his new album, his stockpiles of turmeric and his pile of dirty washing off home with him (see previous blog on how all that happened) it’s time to tackle one topic which, let’s be honest, was made more difficult by the presence in our household of the Greatest Living Songwriter and his complex needs: the weekly food shop.

Now, as regulars of this blog will probably have gathered by now, my heart – and even my head – is somewhere to the left of Genghis Khan. I’m not going to pronounce on anything political on this blog, particularly the constitutional questions that have split the UK, and Scotland, in recent years. There are enough people doing that already. Let’s just peg me as a bleeding heart liberal with a small ‘l’ and leave it there. So what? you might well think: well, when it comes to supermarket shopping, it does tend to make a world of pain.

UK supermarkets must be amongst the most powerful, and unaccountable, commercial companies in the world. The ‘Big Four,’ being Asda, Morrison’s, Sainsbury’s, and Tesco, control between them a huge market share of our food and drink shopping, not to mention all the other things they branch out into, like petrol, clothes, fetish gear, etc., etc…. and the lockdown has been good to them.

A recent news item showed that Tesco, in particular, had regained some of the market share it had been losing to the likes of the German discounters Aldi and Lidl. I’m positing the theory that a relaxed amble through Aldi or Lidl, looking at all the crazy Random Shit In The Middle Aisle (keyboards, leisurewear with healthy-looking Germans smiling happily on the packaging, power tools up to and including a wood-etcher – I know, I bought one) has become less important than getting the Big Shop done as quickly and efficiently as possible, at the biggest supermarket with the widest aisles you know of.

Now, underdog-championing being a default of the classic bleeding heart liberal psyche, it would be easy just to slag off the Big Four; but in fairness, the quality and range of food in the UK has improved massively since my childhood, and that’s partly down to them. The public gets what the public wants, though, and what the public mostly seems to want is low prices, to the extent now that we spend a much smaller fraction of our overall income on food compared to what we used to. So other considerations, considerations us pinkos might think important, like, say, the environment, or the workers – whether it’s our native farmers or wage slaves half way across the world – getting paid something decent, tend to get sacrificed on the altar of Low Price.

Easy for you to say, with your relatively comfortable financial position, you might interject at this point. And that’s true, certainly, especially when you unpack that proportion of spend on food a bit. In the UK, overall, we currently spend just 8% of our household income on food;  that compares to 30% in India, and 59% in Nigeria, according to this site. The same site says that our average spend on food has halved between 1957 and 2017.

But that’s not the whole story. The stats quoted also show that the current poorest 50% of households would have to spend 30% of their income – equal to that India figure – on food that meets Public Health England’s idea of a nutritional diet. In the poorest 10% of households, that rises to 75% of income.

In other words, the overall average spend gives a misleading picture: spend on food has greatly decreased for those of us who have an above-average income. For those who haven’t, though, food spend remains a big part of their domestic budget. And spend on good food is even harder to afford. Cut correctly, these stats actually give a very clear picture of the increasing inequality in our country.

So I’m under no illusions that bleeding heart liberalism could be seen as a luxury item. All the same, it would be nice to think your weekly shop left you stepping lightly on the planet’s surface, wouldn’t it? And yet, at every turn, the shelves seem packed with ethical dilemnas. Take, as you generally do in a UK supermarket, the fruit and veg section first.

Here, I tend to buy as local as possible (i.e. Scottish) to minimise the food miles, and organic if it’s not too ludicrously overpriced and of reasonable quality. I don’t care if the fruit and veg is oddly shaped, as the supermarkets seem to think I should: I do care if it’s ripe or not. So far, so simple: but then there’s all the other Issues to think about, often brought on by the fact that Scotland is very far from self-sufficient in grapefruit or bananas.

Fair Trade: Good. Fine. Spain: Good because it’s relatively close to us, food-miles wise? Or Bad because they’re draining their southern half’s water table to sustain an unsustainable agri-industry? Not to mention the North African immigrant workers on shit pay living in shanty towns next to toxic chemicals? Better to buy from African countries, and sustain their economies, even if it means more food miles? Errr…

Then there’s the whole boycotting thing. At certain times of the year, Morrison’s seem to only have Israeli potatoes. They’re the bad guys, right? They certainly seem from the news reports to be pretty tough on the Palestinians? But am I being anti-semitic as well as anti-Zionist? That’s the last thing I am, honestly. Tricky stuff – and here’s the thing: I’ve reached the age and stage where I realise that I’m shockingly uninformed on, for example, the Middle East situation, and increasingly suspicious of the sources of information (both new and old style media) I rely on. I basically need to go and do a degree in political science just to get out of the Fresh Produce section.

Once I do stagger off, dazed and confused, into the other aisles, more ethical mazes await. Peanut butter, for

example. Does it use palm oil? If you read the tiny writing on the label, most do; some claim they use ‘sustainably sourced’ palm oil; a few, including Sun Pat, don’t. Because Palm Oil Is Bad. It kills orangutans, whose forests are being cleared to create a monoculture of palms. I definitely don’t want to kill any orangutans. But wait. What’s this? An article in the Times that says palm oil is not so bad, they’re growing it in other places, and it’s probably fine?

And that leads me to the other thing that makes this all so difficult: what I’ll call, to give the dietetics industry a dishonourable mention, The Great Breakfast Flip-Flop. As in, for years the so-called ‘diet experts’ have been saying, it’s bad to skip breakfast. Right up until recently, when they now say, it’s okay to skip breakfast. Well, which is it? Should I give one article from five years ago written by, or quoting, such an ‘expert’ more or less credence than one written last week? What scientific studies have been done in the interim that back up this volte-face? You can see such flip-flops in every aspect of advice on what you should and shouldn’t eat, and, increasingly it seems, on ethical issues like palm oil too.

This Big Shop is making my head spin, and we’ve only just covered fruit, veg, and peanut butter. Exiting the meat aisle, where I’ve taken a decision recently to give up beef  – mainly because apparently they’re the planet’s biggest farters, poor things, and are therefore huge contributors to global warming, as well as in a secondary sense being a factor in deforestation – we enter the seemingly safe waters of plant-based dairy alternatives. This seems a calmer part of the supermarket, partly because I don’t live somewhere trendy. 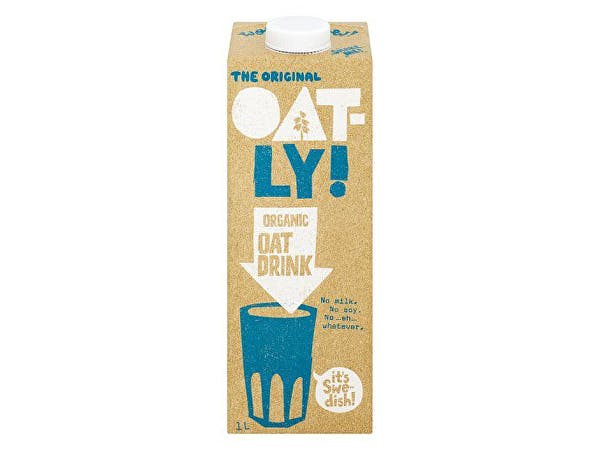 But wait! What new madness is this? Turns out that, by avoiding dairy, I’m still killing the planet! A recent article points out all the bad effects of all the alternatives. Soya contributes to massive amouts of deforestation world-wide. Bad. Almonds mainly come from California, where they’re pollinated by truckfuls of honeybees that are so stressed by the experience they’re dying in their millions. Bad. Just as well I don’t like coconut, because its milk production exploits its workers and destroys rainforests. Bad. Bacteria breeding in rice paddies produces methane, contributing to global warming – plus it’s heavy on water. Bad. Top available option here? Oats. Shame Oat milk (or mylk, if you will) reminds me of the old joke about the similarity between making love in a canoe and Tennent’s lager: fucking close to water.

Uuuurrrgghhh. I could go on, and on, but I’m sure you’ve got the point. All of this stuff is really hard, dude, and it’s too easy to proceed on the basis of misinformation. I want to be properly informed: but I’m kinda busy on other projects apart from food shopping, like becoming the next Bruce Dylansteen, and I don’t totally have time to reasearch it all as I should? But I do care – and like many Boomers, I may say, have cared long before the word ‘woke’ became more than the preterite of ‘to wake.’

Plus I kind of miss not having His Bobness around to shop with. He seemed pretty well plugged in to some of these issues, at least. Although it was pretty hard to make him out through his facemask at times.